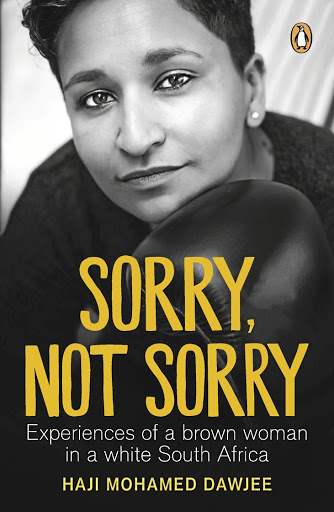 An edited extract from Sorry, Not Sorry by Haji Mohamed Dawjee, in the chapter "We don't really write what we like"

"No one owns their stories and the telling of them like white male writers. They are given endless opportunities for it. They can write about anything. They can have reams of motivational articles published about being "bosses".

Without, mind you, ever having to refer to sexual harassment, unequal opportunities, discrimination or unequal pay. But the cherry on the vanilla cake is that they also get to write the soft, sensitive, soulful stuff. You know?

Charming. No lives of servitude here. No minds of servitude either. They are just out there, writing what they like. And media outlets cannot get enough of it.

Let's talk about Steve Biko for a second. In 1978, Biko's collection of essays, I Write What I Like, was published in South Africa. The name of the book is now famous and [the book] is regularly quoted.

Biko, founder of Black Consciousness Movement, is still a powerful figure in SA.

He was a courageous fighter against apartheid whose writing and insight is testament to not only his wisdom but also his passion and courage.

He is also extremely cool. The way he lived and the way he died are romanticised. Today's youth may not have read the literature, but they have certainly adopted Biko's definitive image, which in Millennial terms can only be described as #radicalfleek.

The key precept in the Black Consciousness Movement can be summarised in one quote from the said book: "The most potent weapon in the hand of the oppressor is the mind of the oppressed."

The quote addresses mental slavery. It urges black people to own their stories, to break free from the shackles of predetermined narratives [that are] imposed on them by the people history "belongs to". It is a calculated statement.

Firm in its determination to inspire black people to discover their own past, their own values and their own selves.

How can we make white people realise that they are not superior but only human, if we cannot tell superior stories?

Meet the teenage feminist who has just published her first book

Tired of reading about damsels in distress who are saved by knights in shining armour‚ Ripfumelo says she started writing her own books.
News
3 years ago

Let's admit that we may write, but we definitely may not write just anything.

These kinds of stories are empty of confrontation and that's considered okay.

We own the hard stuff. We own the struggles. And if we don't write about them, the country will forever dwell in the lily-white utopia that once was. But here's the truth: the struggle is exhausting. And so sometimes (by which I mean a lot but not all of the time), I wish I could get paid to write the nice stuff. Because, you know what? We also like nice things.