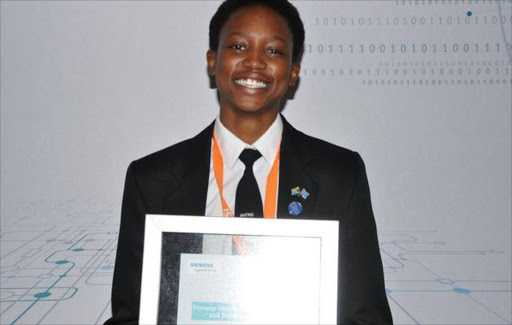 A 17-year-old Empangeni girl from Ongoye High School‚ who invented a smart system that monitors energy use in homes‚ has won an all expenses paid three-year engineering apprenticeship in Germany.

Sinenhlahla Dlamini’s system monitors geysers‚ heaters and stoves and will help households reduce their energy use.

“It’s so overwhelming‚” said Dlamini‚ whose science teacher rushed on stage with her when the announcement was made. “It’s like I’ve been given a whole new life – the next three years will completely change my world.”

She will graduate from high school at the end of the year.

The prizes were awarded at the Eskom Expo for Young Scientists‚ according to a statement issued by Siemens on Friday. More than half the participants at the expo this year were girls.

Dlamini will join a training programme at the Werner-von-Siemens Vocational School and the Siemens Professional Education Lab in Berlin.

Siemens also presented three engineering bursaries worth R60 000 each for students to study electrical or mechanical engineering at a South African university.

The students are: Kgoale Delton Rathoakga from Mohumi Secondary in Mopani near Tzaneen‚ Lawrence John van Staden from St Dominic’s Academy in Newcastle and Ngcebo Thusi from Newcastle High School.