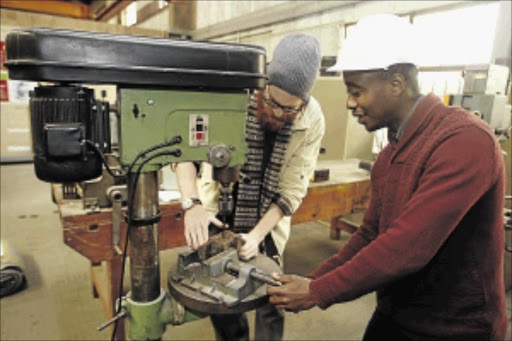 MIRACLE MAKER: Christaphor Berry and Refilwe Lediga with their machine that they claim can build houses Photo: Vathiswa Ruselo

After four years of engineering studies at the University of Johannesburg, two civil engineering graduates, Refilwe Lediga and Christaphor Berry, chose to venture into business instead of looking for jobs.

Lediga is studying towards a masters degree in civil engineering and has partnered Berry in an innovative business in construction called Print-Crete Technologies.

The two have invented a house building machine. The machine can construct walls from scratch, all the way up to the roof . Aimed at reducing construction costs, time and human errors, the machine can build 10 RDP houses in just one day, they claim.

The two, who met at varsity, came up with the idea in their final year when they were contemplating whether or not to join the workplace or become entrepreneurs.

The two took time off their busy schedule to explain in simple terms how their machine works. They said the concept works with 3D printing technology. Walls are constructed when the machine is directed to form structures through robotic arms.

"This technology reduces construction costs by about 50%," he said.

"We are in talks with bodies such as the NHBRC (National Home Builders Registration Council) and this will help with the certification of innovative and non-standardised construction processes and methods," said Berry.

They are also talking to the government as well as the private sector for partnerships.

The two are not worried that their invention will adversely affect job opportunities. Their major goal is not only to revolutionise the construction industry, they aim to influence global markets.

"The trend we've observed with new technology is that it also creates new industries and opportunities. Opportunities to manufacture these machines in South Africa and supply them to the world exist and will make SA pioneers," said Berry.

It's no longer possible to compete with cheap Chinese construction labour without taking nationalist and protectionist policy positions, they said.

They believe that their advanced automated construction method is a solution to the country's housing problems. They said their invention not only focuses on building RDP houses but can also be used to build swimming pools, pizza ovens and many other things.

The two said they drew inspiration from American-based and South African-born entrepreneur Elon Musk who is now a global business figure and Google co-founders Larry Page and Sergey Brin who all used their technical backgrounds to introduce new inventions.

Lediga is the founder and chief executive of Varsity TV, a campus television channel focused on unearthing young talent. He is also secretary of the South African Institute of Civil Engineers (JHB).

Berry has created and published games that are now available on various online platforms.