Young whizz kid lecturer is an achiever of note 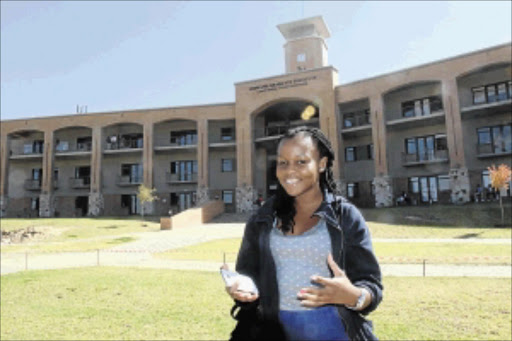 AT THE age of 22, Ontiretse Tshite is one of the youngest lecturers in South Africa.

She laughs freely, has braids, and her dress code does not necessarily scream "lecturer".

In fact, it is quite the opposite. It speaks of a young woman who, instead of teaching, should be listening to her lecturer.

But that is not the case with Tshite, who holds a BCom in accounting and honours in internal auditing.

Tshite from Moruleng, North West, giggles wildly about her life as a lecturer.

She has to deal with hopeful romantics who pursue her and older students who, by her own admission, intimidated her when she first began working at the Midrand Graduate Institute this year.

"I told myself that I possessed something they didn't and that was my knowledge and that is why I was their teacher in the first place," she says with a laugh.

Tshite's position has not stopped male students from trying their luck to woo her though. "They won't stop coming to my office and I know that they are not exactly there for help with their studies.

"I have a boyfriend and I don't think he is particularly chuffed about these boys making moves on me," she smiles.

An achiever of note, at the age of 16 Tshite represented her province, North West, at the Sowetan Anglo Platinum Young Communicators Awards although she did not win.

"It meant a lot to me. I was representing the whole province and I was actually very proud," she said.

The accounting lecturer, a former student at the institute herself, says she has her parents to thank for the person she is.

"They kept me on the straight and narrow, but I also wanted to achieve and that is why I worked hard. My sisters also encouraged me a lot. The fact that both of them are doctors served as motivation. My two brothers were also always very supportive," she says.

"Even as a child while playing with friends, I used to play teacher. It is an underlying passion I have. Even after graduating last year, I could have easily gone the 'corporate route' but I just love teaching," Tshite says.

CTI Education Group chief executive Mark Cunnington says the group is proud of Tshite's achievements, even more so because she is a former student.

"We are very proud of lecturers like Ms Tshite, young, knowledgeable, passionate and dedicated. Our sole objective remains the preparation of our graduates for a successful future alongside a wide spectrum of employment opportunities," Cunnington says.

Having obtained her honours last year, Tshite plans to do a master's degree next year.

Tshite's advice to her peers is: "Work hard and always keep your eye on your goals."