Termites can add a bite to a meal 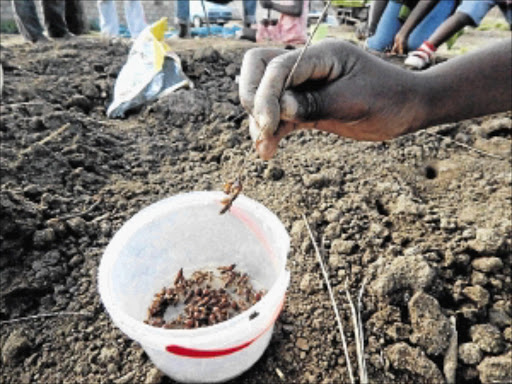 SHE dips a stem of dried grass into one of several holes of the red soil mound and leaves it there for a few seconds.

Only when the stem starts to vibrate does Tshifhiwa Sigama, 48, know she has made a catch.

Her three children and their friends watch in awe and excitement when six mean-looking, red-headed insects struggle to free themselves from the dried grass stem Segama had used as bait.

Sigama throws the termites she has caught into a five-litre bucket already alive with the restless creatures.

The children look on impatiently; they can't wait any longer to have a dish of fried magege (termites) for supper.

Just as in many rural communities across Africa, magege are exotic food in HaMutsha village outside Vuwani in Limpopo where Sigama lives.

Every termite season - November, December and January - she takes on termite mounds to catch magege to save on food costs.

University of Witwatersrand entomologist Professor Frances Duncan said several researchers are looking into the possibility of rearing insects on a large scale to use as food.

"Termites are eaten throughout Africa and in Asia. They are a good source of protein, fat and carbohydrate," said Duncan, who is also president of the Entomological Society of Southern Africa.

Si gama says she likes magege season because she does not spend money on relish.

"Magege can be caught by anyone for free," Segama says. "After catching the right quantity, they are washed, fried and turned into relish that can be served with pap. They make a good meal."

She says preparing a dish of magege takes as little as 30 minutes, with water, tomatoes and salt as ingredients .

"Good quality magege have red heads that turn brownish to show they are ready to serve. Their taste is unique and delicious. Those who have never tasted them can use the taste of masonja (mopani worms) as a reference of what magege probably taste like."

Sigama has filled a quarter of a five-litre bucket with live magege that afternoon. That, she says, was enough to serve a family of seven.

Though magege are a favourite with children, Sigama says it can be dangerous to allow them to catch the insects without adult supervision. "Magege's bites are painful and brutal enough to cause bleeding," she says.