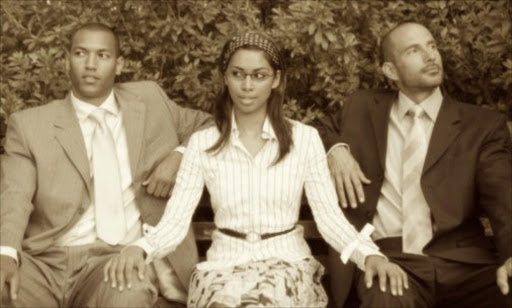 SO YOU think men cheat more than women? Think again.

While the stereotype has always been that most men will at some point cheat on their spouses, shocking new studies have revealed that when it comes to infidelity within a marriage, more and more women are dipping their toes in the well of unfaithfulness and deception.

According to the National Opinion Research Center's General Social Survey, the percentage of wives having affairs rose to 14.7% in 2010, while a survey of 3000 people conducted by British dating firm Coffee & Company, found that only 9% of men admitted to infidelity compared with 25% of female respondents.

In light of this, we wanted to hear the unspoken story of the men who cheat with married women.

While the tale of a married man's mistress is a familiar one, the men involved with married women rarely speak out.

We took to the street to find out if men are really comfortable with being the side dish:

Tumi Mooketsi from Lobatse in Botswana:

"It's [revealing that you are involved with a married woman] an ego thing. It doesn't sit well [that] a man knowingly shares a woman, so of course it bothers them.

"But most men who find themselves in that situation comfort themselves with the fact that, in a way, she's not cheating on him. If she's not with him, she's at home with the husband."

"Most men weigh the pros and cons of dating a married woman. There's usually some benefit involved for the guy, be it money or sex, which will make them overlook that she's married."

"People think men don't care, but they actually do. No man wants to share a woman, even though some see no wrong with women sharing a man. This is why polygamy is widely accepted, but not polyandry.

"So it's emotionally taxing for men to be on the flip side."

We spoke to *Itumeleng Seroke of Soshanguve in Pretoria, who is currently dating a married woman.

"In all honesty, she came on to me. We are in the same stokvel and even go to the same church.

"I know her husband very well, and she often comes to the stokvel with him. She came on to me when she asked me to drop her off at home one evening because she had come to the stokvel without him, and we ended up kissing in my car.

"We've been together for over a year now," he says.

Seroke says although the affair was initially not meant to be a serious thing, the relationship has become complicated.

"She gets angry when I try to date other women and threatens to leave me.

"I've told her times how unfair that is, and her reasoning is always the same - that I knew she was married [when we got together] and I was single, so me getting someone now would be cheating on her because she met me when I was single."

Though he has developed some serious feelings for the married woman, Seroke concedes that a future with her is uncertain.

"I'm not [trying to] deceive myself. I know she's not going to leave her husband any time soon, and she's made that clear. I used to get angry, and would ask her if she made love to him, for instance, but I realised that I'm just hurting myself. I don't want to know, and we've [agreed] not to discuss him."

Seroke says they meet weekly at his friend's place to avoid neighbours wondering why the married woman frequents his place.

They also exchange pleasantries casually when they meet in church or at the stokvel.

"I wish that someday we could be together. She tells me she loves me daily and I believe her.

"But I wonder why, if I was her perfect man as she says, am I reduced to a makhwapheni."

*Not his real name

Notes for female side dishes:

"While the majority of men are driven by pure sexual gluttony for cheating on their wives, it's an indication of an emotional deficiency in the relationship on the woman's part if she decides to have an affair. Cheating is a symptom of an underlying dissatisfaction within the relationship, be it sexual, or emotional.

This is not to say that an affair by a woman is justified.

Any form of cheating shows the lack of maturity by the cheating partner to sit their significant other down, and try to resolve issues.

So they instead opt for the easy way out, which is having an affair.

Ngakane says in any cheating situation, it's important for the person who is the side dish to note the following:

They might tell you how much they love you, and they somehow do, but incomplete love is not really love.

The number-one sign that the cheater is taking you for a ride and just using you, is them vilifying their partner to you. None of it is true. Run.

It might be a cliche, but it's true; if they can cheat with you, they will cheat on you. The basis of the relationship is already tainted

Feelings are inevitable, and choosing to date a married person sets you up for a train wreck.

Nothing is more painful than having solid, legit feelings for someone who is unavailable. You deserve better.

While dating this married person, you are closing off opportunities to meet single, honest people who you could form something meaningful with.

Have empathy. Ask yourself, if it was you waiting for your spouse to come home while they were with someone else, how would it feel? Would you want betrayal and de