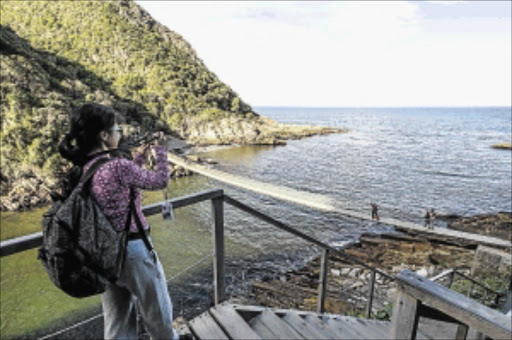 AS SOMEONE who spends an hour in Joburg traffic to get to work and chase deadlines, when an opportunity came to escape the busy city life I gladly accepted it.

I lived in Port Elizabeth in Eastern Cape, for four years and still visi t the Friendly City, but I was not aware of a hidden treasure less than 200km away from PE - the national park at Tsitsikama on the Garden Route- until the invite recently.

From the moment I entered Tsitsikama I forgot that there was anything else on earth except nature. In the Garden Route National Park, the only sound you hear is the lapping of the waves. The only thing you see is the mountain range surrounding the park.

The park covers a long coastline that stretches for 80km and offers a variety of activities for visitors.

I was hosted at the park with several other journalists to honour South African National Parks Week last month.

On our arrival, and before we could even go to our rooms to freshen up, we immediately went on a boat ride. It was refreshing after sitting on a flight for close to two hours from Johannesburg to PE, and driving for about three hours from PE to Tsitsikama.

I was not sure how I felt about going on the boat ride as I had never been on one before. But it turned out to be a fun and exhilarating experience, although the sea was a bit rough. The only disappointment was not catching even a glimpse of any dolphins, even though the park is home to this adorable species.

After the adrenaline rush of the boat ride on the turbulent sea, we proceeded to Storms River.

The main attraction while sailing on the river was the bat cave which is home to about 3000 bats. The cave is scary and dark and we could actually hear the sound of the bats flying as we passed by.

We finally got to rest and were offered finger dinner, prepared by a restaurant at the park before retiring for the night in our chalets.

After experiencing the beauty of the park, I expected nothing less from the chalets.

Well, I found out that the chalets are not as luxurious as I had hoped but rather more practical. The one I was accommodated in had a kitchen and lounge which can double up as a second bedroom. It's big enough to accommodate a family. The best part about the chalet was the sea view. At night my lullaby was the sound of the waves.

On the second day after breakfast, the 46-year-old hiking trail, known as the Otter Trail, awaited. Usually, hikers do the five-day, hike which is 42km long. But we were treated to a mini version of the real thing by walking just 6.4km of the trail. We stopped a few times to admire the rocks and flora on the way. After the tiring hiking trail we headed into the Tsitsikama Forest which is home to some of the oldest and tallest trees in the country, one of which is the Outeniqua yellowwood, famously known as the Big Tree. It is 1000 years old and 36.6m tall. Until then, I had never seen such a tall tree in my life.

If you want to enjoy fresh air and experience the wonders and beauty of nature, visit the Garden Route National Park Tsitsikama, Knysna, wilderness.

Macupe was hosted by FNB.