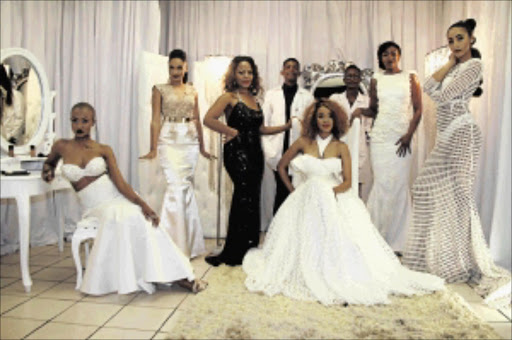 MAKING A STATEMENT: Designers Quiteria Kekana and George Malelu (with glasses) and MC Glenda Moiane, in black dress, with their celebrity brand ambassadors at the opening of the Quiteria & George boutique in Gandhi Square, Johannesburg Photos: Bafana Mahlangu

The launch of the store, "Quiteria & George", in the heart of Gandhi Square, Johannesburg, saw their theme "La Madame" come to life in front of a gasping crowd.

Their celebrity models, who included television presenter Dineo Moeketsi, were all adorned in white which, according to co-designer Quiteria Kekana, was meant to represent fantasy and perfection.

"The theme name 'La Madame' was purposely picked to be in French because France is the epitome of haute couture. French women are very specific about their garments. They are interested in the fine details that go into a dress, the intricate stitching, the cut, the shape, and that is what haute couture is about at the end of the day.

"Dineo's ball gown took three weeks to perfect, for example, with all the beadwork stitched on by hand."

Kekana said the label was on the right path to perfecting the art of couture, which he says is very complex. "Not every designer out there can get it right."

The designing duo say their decision to have several brand ambassadors was to represent all women of different shapes and sizes.

"[The women] are vastly different and have different jobs in the industry. So we wanted our customers to pick an ambassador they most identified with. Full-figured women can be beautiful in couture."

Kekana and George Malelu met in 2010 when Kekana was ambassador of the Mpumalanga Fashion Week where Malelu was showcasing his collection.

In November 2013 they formed their label, focusing on designer couture and have since dressed the likes of Amanda DuPont and Siphokazi January.

Within the team, Kekana is the label's creative director while Malelu is the resident designer.

The duo says that despite being relatively new in the industry, the celebrities they picked have always supported them by not trying to exploit their young talent.

"A lot of designers give away free gowns to celebrities to gain exposure, and that is something we went against despite being an upcoming brand.

"These celebrities would actually purchase our creations and were willing to give us exposure too," Kekana says.