Caring mom takes up struggle of the deaf 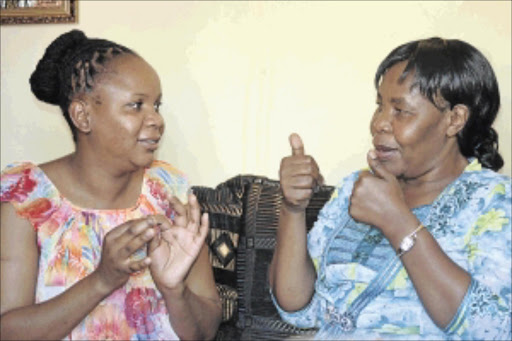 signed bond: Sylvia Manganye and her adoptive mother Senzi Motha use sign language to communicate with each other and other people coming to Motha's house for help photos: vicky somniso-abraham

HOUSE number 55 at Esangweni Section in Tembisa on the East Rand has become a safe haven for the deaf community.

It is a home where wonderful and painful stories of many deaf people are shared. Due to the number of people who flock to the four-roomed house, one could mistakenly think it belongs to an established organisation for the deaf.

But it is owned by South African sign language (SASL) interpreter Senzi Motha who has opened her heart and home to the deaf.

Motha, 53, was introduced to sign language by her adopted deaf daughter and former colleague, Sylvia Manganye, 37, in 2002. Back then she could not sign and they had to communicate in writing.

"When she joined our company in Wynberg, I asked her to teach me three letters of the alphabet a day until I completed 26. She then taught me how to sign names and that's where everything started. On the eighth month, I was interpreting for her when we had meetings at work," Motha recalls.

Their relationship grew stronger and, in 2004, Manganye moved in with Motha and her late husband Titus. This brought Motha closer to other deaf people she met through Manganye and she has now become a pillar of strength to many.

"I'm in good relations with the deaf community. I have 30 sons and 50 daughters who are deaf.

"They flock to my house to seek help and my son [her biological son Nkosinathi] would jokingly say 'incane lendlu [this house is smal]; we'd better call the house DeafSA' and we would laugh about it."

This good Samaritan also offers counselling to abused women and those who are HIV-positive as well as marriage and relationship counselling.

"I normally encourage people to get tested so that they can know their status. I inform those who are HIV-positive that it is not a death sentence, there is still life afterwards. They need to take treatment and live a healthy life. I also encourage those who are not, to abstain from sex or use protection."

Motha worked at DeafSA Gauteng as a volunteer HIV/Aids project interpreter from 2010 to 2013 and would assist in other departments.

She says the major challenge in the deaf community is the lack of qualified interpreters. Realising this shortage, Motha decided to learn basic sign language at Wits University in 2004.

Because of her affection for the deaf, she now interprets for them at weddings, funerals, during court cases and at disciplinary hearings at no cost.

"I interpret what the pastor is saying when they exchange marriage vows. During funerals I interpret songs and their messages. I also go with them to hospital and to private doctors for consultations because the doctors cannot sign," Motha says.

"The deaf people are supposed to pay me but they don't. I don't worry about that because it's a calling to help them," she says.

This year she intervened in a sexual harassment dispute between Manganye and a colleague at her workplace in Midrand. The case was heard at the Pretoria Magistrate's Court and the court granted Manganye a protection order against the perpetrator for five years. The order prohibits him from having any physical contact with her, sexually harassing her or assaulting her in any manner.

Despite learning the basics at Wits University, Motha could not practise as an interpreter until she had completed her matric. This she did at Kwazini Adult Centre in Tembisa in June this year.

"Passing matric will help me to find a permanent job as I am freelancing and helping the NPOs (nonprofit organisations) in Tembisa."

Motha says the scandal that broke out during former president Nelson Mandela's memorial service through fake interpreter Thamsanqa Jantjie speaks of their many challenges.

"It hurts that people who are fooling others get top jobs, but I know God will reward me".