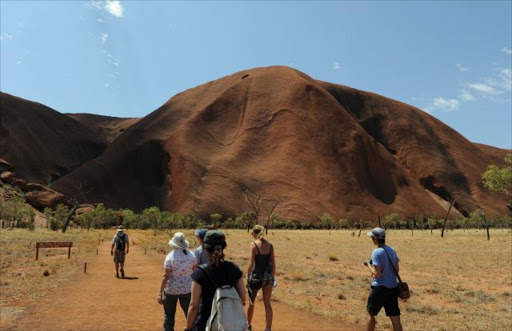 For many tourists, the experience of seeing Uluru for the first time in the middle of the Australian desert heartland brings a feeling that is difficult to suppress -- an urge to clamber up the daunting formation once known as Ayers Rock.

But while a modest link-chain rail guides climbers up the formation's steepest slopes, the traditional Aboriginal owners of Uluru, whose connections to the sacred site date back tens of thousands of years, don't want climbers -- especially given that more than 35 people have died attempting the physically demanding feat.

"Uluru is sacred in our culture. It is a place of great knowledge," the traditional Anangu owners say in a sign at the base of the rock which is translated into six more languages.

"Under our traditional law climbing is not permitted.

"As custodians, we are responsible for your safety and behaviour. Too many people have died or been hurt causing great sadness."

For visitor safety, cultural and environmental reasons the park is working towards closing the climb. It is currently left up to visitors to decide whether they tackle the sandstone monolith which rises 348 metres (1,148 feet).

American tourist Jeff Bordell says his instinct was to climb, but after speaking with an indigenous man he came to understand that it was frowned upon.

"It's attractive to my spirit, it calls my spirit to go on the rock," he said as he walked the 10.6 kilometre (6.6 mile) trail around the base of the 500 million-year-old formation.

"This place is very spiritual and it's attractive and it calls to me. And probably lots of people."

About 250,000 people visit Uluru each year and, while there are no official figures on how many climb, visitor surveys from a small number of people suggest somewhere around 20 percent take on the challenge of the ascent.

Numbers of climbers have declined significantly over recent decades, with Australian National University research finding the number of visitors climbing Uluru had dropped from about 52 percent in 1995 to 38 percent in 2006.

Situated in the remote Outback in central Australia, Uluru began to be promoted as a place for tourists in the 1940s. The site took off and at one point decades back, the chain railing was installed.

In the years since, attitudes have radically changed and in 1985 the Uluru-Kata Tjuta National Park, which includes the group of huge domed rocks once known as the Olgas, was officially handed back to the traditional owners.

Under the joint management scheme, Parks Australia work closely with the traditional owners to manage cultural sensitivities and the board of the World-Heritage listed park is working towards closing the climb permanently.

The park's majority Anangu board want to be satisfied on three measures before they shut it down -- that the proportion of visitors climbing has fallen below 20 percent, that adequate new visitor experiences are in place, and that the natural and cultural experiences offered are the critical factor for people visiting the park.

In the meantime, concerns have arisen about the possible damage to the rock from climbers tramping up the slopes which host tough, spiky spinifex grass, native fig trees and natural waterholes.

Some leave rubbish and graffiti while others urinate on the rock, producing a waste that can wash into waterholes after rain and in turn be harmful to the plants and animals of the park.

Safety is also a major concern at Uluru -- where summer temperatures can hit 45 degrees Celsius (113 Fahrenheit) -- and the climb and some parts of the base walk are closed in extreme heat.

A timely counterbalance to the need to climb has been the growing global respect for Aboriginal culture, says Robert Taylor, a board member with the Western Australian Indigenous Tourism Operators Council.

"They want an Aboriginal face to greet them, they don't want to come here and have someone else do that tour or show them that history," he said from Alice Springs.

For tourist Laurent Berhault, a Frenchman from New Caledonia, it was inconceivable to holiday in Australia without visiting Uluru. Mindful of the wishes of the traditional owners, he said he would not climb.

"If you come to Australia and you don't see Ayers Rock it's like going to Paris and not seeing the Eiffel Tower," he said. "You must see Ayers Rock. It's beautiful."