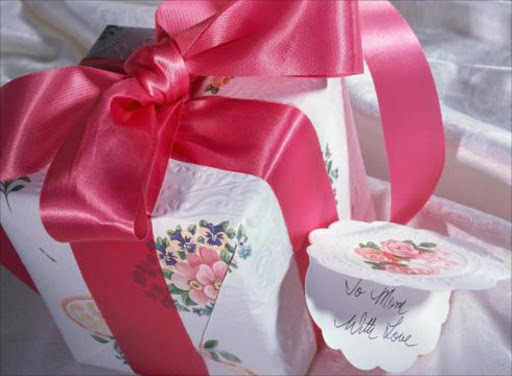 South Africans will spend close to half a billion rand on Mother's Day this year as part of a global frenzy that has made Mother's Day the third biggest spending bonanza globally.

There was a time when mum was happy with breakfast in bed, a flower in a vase, and a hand-drawn card for Mother's Day (May 12). But today it is a multi-million rand industry.

Globally Mother's Day is the third biggest retail celebration after Christmas, and back-to-school spend (followed by Valentine's Day and Easter. Father's Day squeaks in just ahead of Halloween), according to the U.S. National Retail Federation. We see the same trends here.

Paul Kent, managing director of SureSwipe credit card machine distributor says, "In 2012, Americans spent $18.6 billion (R171 billion) on Mother's Day. Britons spend three times more on Mothers Day than Fathers Day (June 16, this year), or Pound 400 million (R5,6 billion) last year. And restaurants everywhere are packed for brunch and lunch with children and their mums. In South Africa, and elsewhere mum is most likely to get a gift card so she can choose her own gift. This is a driver behind the $66 billion (R595 billion) gift card market in the United States."

Research by Passport Consumer Finance 2012 shows that the gift card market has soared in South Africa from around 300,000 gift cards in 2006 to more than 3.3 million in 2011. The gift card market here is now worth R4.6 billion and growing by at least 20 percent a year. Average spend is around R140.

And so if you're looking for a way to help small businesses to survive, one of the solutions is obvious: easy to manage personalised gift cards through their credit and debit card swipe machines. SureSwipe, concerned about the failure of close to half a million small businesses in the past five years with the loss of almost 2,5 million jobs, and predictions of faltering consumer spending, began a study of these cards last year through small retailers. And what they found is that consumers who walk into a store with a gift card, of say R150, will walk out after having spent R300 in the store.

Kent said that the SureSwipe Gift Card Programme was being rolled out to all SureSwipe machines nationwide which meant the cards could be used for anything from paying for a visit to the dentist for a clean or tooth-whitening, to a meal voucher, a gift card for a florist, perfumery, car service, or jewellery. "It's a great way to give a gift because it can fill a practical need or provide a treat."

In the United States consumers tend to buy five to six gift cards a year with those for specific stores the most popular. The SureSwipe cards are personalised for the recipient by the individual store.

Most gift cards in the U.S. are sold, in the following order, for a fine dining restaurant, department store, supermarket, specialty retail store, discount store, chemist, and casual restaurant, entertainment, coffee shop, and fast food. Research by First Data Corporation in 2011 showed that, "Most gift card recipients (71%) spend more than the amount of the card. The higher the value a gift card the more likely consumers prefer it to a gift," First Data reported.

Kent said, "South African stores report that consumers with gift cards enter the store in an upbeat mood. They stay longer, browse more, and chat with staff about who they received the card from. It's a fantastic staff-client relationship-building tool. Our wide range of clients from medical consulting rooms to stores and motor vehicle outlets are all gearing up for Mother's Day gift card spending."

Mother's Day spending is changing too; almost 13% of mothers with gift cards opt for electronics such as tablets and digital cameras. Kent says, "In the past the top five gifts for mothers were flowers, chocolate, alcohol, beauty treatments or a card. But our research shows gift cards to hairstylists, jewellers, gyms, fancy home-ware stores, and clothing outlets are popular."

British research shows that 47% of dads receive just a card on Father's Day (June 16); for dads lucky enough to get a gift, they'll usually get a DVD, alcohol, or a gift card.

Kent said the SureSwipe Gift Card Programme, "is a closed loop program. This means that as a merchant it is your very own branded card programme. The card can only be used in the SureSwipe businessowner's store and no other store, unlike the open loop shopping centre or credit card programmes on offer.

"No other banking provider offers this. This can also be used as a preloaded card; for example, some corporate business parks give their employees a lunch allowance. The card is loaded with the allowance and the employee has the ability to use this card at the local cafeteria."