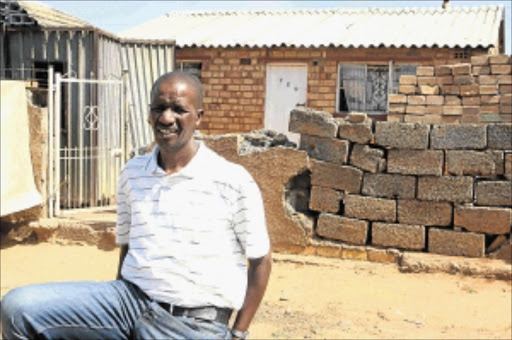 TRICKED: Linda Dlamini outside the disputed family house he was tricked to buy two years ago. dLAMINI, A FATHER OF TWO boys, has been forced TO live in HIS PARENT'S GARAGE AS he tries to cancel the deal. PHOTO MOHAU MOFOKENG

Buying a house in the township which is not enmeshed in controversy seems rare nowadays.

Many prospective buyers have lost their hard-earned money after buying houses from sellers who often do not have the authority to sell the property in the first place.

Most houses are the subject of family disputes or occupants are using the Prevention of Illegal Eviction from and Unlawful Occupation of Land Act No 19 of 1998 (PIE Act) to resist eviction.

Linda Dlamini, 49, is a victim of such a situation and is now battling to get back the money he paid for a house he wanted to buy through an agent, Morobi Sekgobela of TP Moloto and Company Incorporated.

Dlamini, of Mofolo South, Soweto, wanted to get a home for his two sons after getting a retrenchment package. He saw a house Sekgobela was selling on Jabulani Nxumalo's behalf.

Dlamini says he was promised occupation on making full payment of the purchase amount including transfer fees. Dlamini paid R238 500 on March 8 2011, a day after he had viewed the house. But a week later, when he tried to occupy the house, he was in for a rude awakening.

"I went there to cut off a tree that was obscuring the view to the street and before I knew it I was confronted by an angry family who told me it was a disputed family house," he said.

Dlamini says he was told that the seller was not the property's appointed executor.

Nxumalo was later arrested, but Dlamini says he does not know what happened to the case after Nxumalo was granted bail.

"The attorneys promised me that my money will be safe with them until Nxumalo's fraud case was finalised, but now Sekgobela is playing hide and seek with me," says Dlamini, who is currently renting his parent's garage.

However, Thokwane Moloto of TP Moloto and Company says it is up to Dlamini and Nxumalo to decide whether they want to proceed with the sale or not.

He confirmed that they are in receipt of Dlamini's purchase amount pending the transfer of the property by their conveyancer.

Moloto says the house was part of a deceased's estate of the late Mahlathini Nxumalo, who died in 1998 without making a will. He says Jabulani Nxumalo was appointed as the estate's representative.

Moloto says there was a family dispute concerning Nxumalo's appointment, resulting in his arrest for fraud, but he was subsequently acquitted in court

Moloto says because of the dispute the transfer attorneys could not get the necessary documents for the transfer, hence the delay.

"Under the circumstances it is up to the seller and the buyer to decide whether they want to cancel the deal for Dlamini to get his money back," says Moloto.

"Now because the outstanding documents are very few, the next of kin's affidavit and the magistrate's certificate can be issued after the original estate file has been traced and found, since it was missing."

However, Dlamini may not get the whole purchase amount back because part of it was used to pay the agents commission and administrative fees, says Morobi Sekgobela, who is now handling the matter.

Sekgobela says they paid the estate agent his commission though he later conceded that it was improper to pay the agent's commission before the house is transferred to the buyer.

Sekgobela also says Dlamini needs to cancel his mandate in writing and not verbally as he has been trying to do.