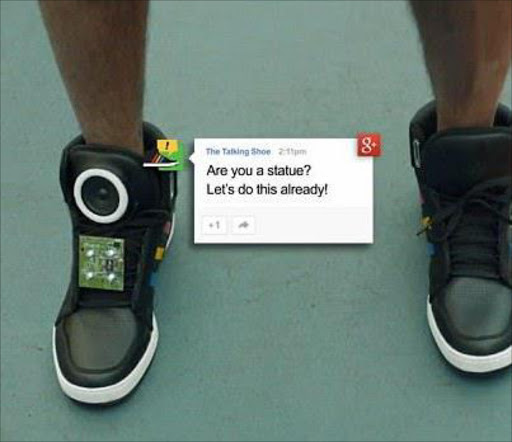 "Are you a statue? Let's do this all ready!"

"Smart shoes" used to be employed as a phrase to describe footwear that would go well with a fitted suit but, if Google has its way, the term is about to be hijacked and redefined to describe a pair of internet-connected sneakers that can track a user's every movement and, thanks to in-built speakers, shout encouraging messages in their general direction, or equally critical messages at those in the user's close proximity.

The heavily customized Adidas sneakers, unveiled at the SXSW conference, feature many of the internal workings of a smartphone - an accelerometer, gyroscope, pressure sensor -- but they also feature a rather large conical speaker from which up to 250 different spoken phrases can be broadcast. These phrases include gems such as "if standing still were a sport, you'd be world champion!"

There are many reasons behind Google's smart shoe concept (and the company is very quick to stress that the shoes are merely a concept). One of which is to get people talking about Google, but the strange objects also highlight the changing relationship people are about to have with objects as the internet of things begins to find a foothold within consumer technology.

The shoes are also meant to be a wake-up call for advertisers (the shoes were developed in partnership with interactive media collective YesYesNo) to show how as the platforms on which the internet is accessed evolves, advertising has to change to keep pace. These shoes can monitor physical activity and push that information to a social network, but they could just as easily deliver audio commercials to all of the other runners on a track or members of a gym.