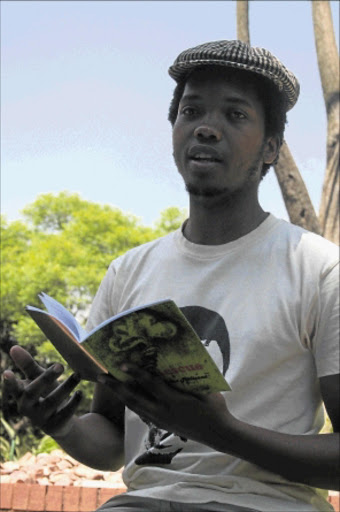 FOR Zama Madinana poetry is his way of expressing emotion and giving voice to political issues that affect the African continent.

"My poems are based on things I feel strongly about. It's painful to see a Somalian mother carrying a child who is dying because of hunger. My work is about dreams, nightmares, civil wars, love and Africa," says Madinana.

Originally from Ladysmith, KwaZulu-Natal, but now living in Joburg, the 28-year-old self-published his second anthology, Rescue, in December.

"It's about saving Africa," says Madinana. "Oceans of blood, civil wars that have engulfed the continent and chains of silence. I am pleading for Africa to be rescued."

He says he began writing poetry when he was 13, but did not consider himself good enough until he reached his early 20s.

His passion for the spoken word is driven by his love for African literature, conscious music such as reggae and hip-hop and great poets such as Don Mattera and the late Sello Duiker.

Madinana says he has performed nationally and has contributed his work to journals and magazines.

Included in the anthology is Depictions of Revolution, a poem he says is about the abuse of culture and power.

"How do we oppress someone in the name of culture? A 13-year-old girl being forced into marriage with a 40-year-old man - what kind of culture is that?" says Madinana.

On the lighter side, a love poem called Nwabisa: The goddess of beauty speaks to everyone who has lost a loved one.

Here the poet misses his former lover and is asking her to return to him.

He expresses his views about events in the country, including the ANC's 53rd elective conference and the Secrecy Bill.

"I am totally against information classification because it will limit writers, journalists and artists. What happened to the freedom that was fought for, if it can just be taken away from us?"

lMadinana sells his anthology at R80 a copy and can be contacted on Facebook. - monnakgotlam@sowetan.co.za