Plea to President to save rhinos wins girl an award 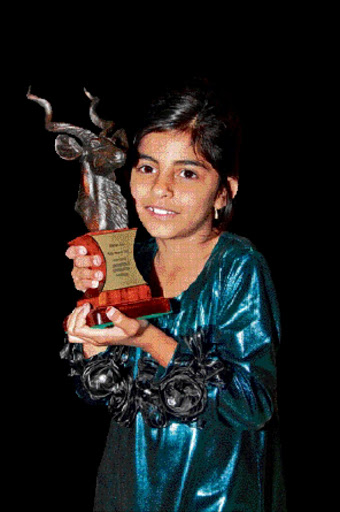 A young girl is expected to use her R20,000 cash prize from the yearly nature conservation awards competition to visit several national parks with her family.

Seven-year-old Afeefah Patel of Johannesburg was awarded the Corporate Contribution to Conservation Award during the Kudu Awards in Midrand, which earned her R20,000 and a trophy at the 8th SA National Parks (SANParks) Kudu Awards at Gallagher Estate at the weekend.

Afeefah's entry was a letter to President Jacob Zuma about saving rhinos. It has won her a prestigious conservation award.

Her handwritten note was published in Sowetan's sister newspaper The Times and simply read: "To the editor. Please tell President Zuma to please look after our rhinos".

The letter sparked interest from the Presidency and also gave impetus to a national campaign against poaching.

Zuma responded by saying: "I want you to know that our government has just been as highly concerned at the staggering numbers of rhinos that have been killed just this year alone.

"Please continue playing a part in promoting the safety of our endangered species. You are a very good South African."

Afeefah said she was happy to receive the award.

"But I am also very sad that bad people are killing our rhinos," she lamented.

Her father, Shiraaz Patel, said: "We hope and challenge similarly concerned people, and call for a wider awareness, to encourage our younger generation to heed the plight of our heritage."

SANParks CEO David Mabunda said the Kudu Awards were an important initiative "... that recognises external stakeholders for their contribution and efforts in making South Africa National Parks the custodian of choice for the national parks system".