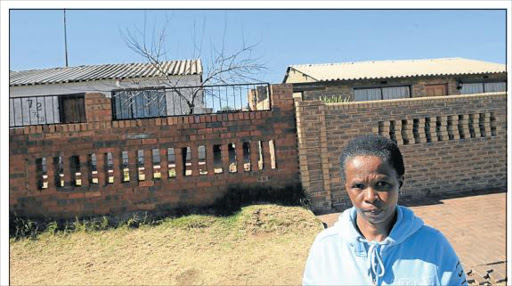 Lack of a proper paper trail leads to misery

BUYING a house is one of the biggest investments that a consumer can make.

Indeed, it is not as straightforward as buying a loaf of bread over the counter as it requires a written contract that must comply with legal requirements to be valid.

A house purchase must be documented in writing and it is recommended that such a transaction be done through a registered and reputable estate agent.

Don't be scammed like Nelisiwe Ndlovu, 52, of Jabulani in Soweto.

She says that she has learnt the hard way to never do business with anyone who is not an estate agent or does not have a registered business to sell houses.

Ndlovu says she now moves from one back room to the other because her parents' house has been sold by her neighbour.

Ndlovu explained that she inherited her parents' property after they died and decided to relocate as her siblings were all married and had no intentions of coming back to the family home.

Ndlovu, who is unemployed, says her neighbour, who was a First National Bank (FNB) employee, advised her to swap her property for the one she would buy at a staff price from the bank.

"I believed and trusted her as she was conversant with housing deals," Ndlovu said.

She says her neighbour, Khosi Nkosi-Sibaya, worked for FNB at its housing division.

Ndlovu said: "She offered to swap my parents' house with any of the ones she would buy at an auction after they had been repossessed."

Ndlovu says Nkosi-Sibaya assured her she would not incur any legal costs in the transaction.

A month later, Ndlovu was asked to vacate her parents' house as it had been sold, she said.

"This was not our agreement, but I moved as I trusted my neighbour," Ndlovu said.

She says she was later housed at Nkosi-Sibaya's backroom as the neighbour had not found her the house of her choice as promised.

But, she says, the new arrangement did not go down well with Nkosi-Sibaya's siblings who later evicted her.

Ndlovu says she has been moving from one backroom to another since 2006.

She claims that her parents' property was sold at a rate that was below market value.

Ndlovu insists that she has no sales agreement or recollection of signing any power of attorney authorising her neighbour to sell the house.

But she does recall handing over her title deed to Nkosi-Sibaya to effect the exchange on condition she would only vacate her parents' property once a new house was available for her.

The mother of two is now renting a backroom that is a stone throw away from her parents' house.

Consumer Line spoke to Nkosi-Sibaya who admitted that she had promised Ndlovu a house as she could easily buy one from FNB's auction sales.

Nkosi-Sibaya says she did buy a house in Protea Glen, but Ndlovu refused to take occupation.

Nkosi-Sibaya admits to not being an estate agent but says she works with Joe Ngwenya who is one.

Nkosi-Sibaya claims that Ndlovu prefers to take occupation of a house situated in the Vaal as she wants peace of mind.

She says her associate, Ngwenya, offered his house to Ndlovu because she was unable to buy Ndlovu a house suited to her preferences.

"I used her R50,000 to pay rates and taxes, and to also evict people who occupied her parents' home after the sale," Nkosi-Sibaya said.

Nkosi-Sibaya also says she entered into a valid contract of sale with Ndlovu and has document as proof in her possession.

Nkosi-Sibaya claims that Ndlovu sold her parents' house because she was not getting along with her sister-in-law.

She insists that she was only trying to help out Ndlovu.

She admits to not having given Ndlovu the contract or agreeing on sale amounts, but insists on having acted on Ndlovu's instruction.

Her associate, Ngwenya, denies being an estate agent.

Points to note when entering a contract

- The parties must reach consensus (agreement) on all the terms of agreement.

- The parties must have the legal ability to enter into the agreement.

- The agreement must not be entered for an unlawful purpose.

- In terms of the Alienation of Land Act, contracts of sale of land must be in writing and signed by the parties or their agents.