Soweto gets its first fashion week 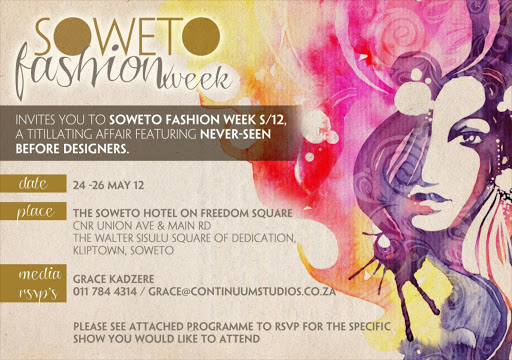 Fashion blogger Mahlatse James says this gives a chance to designers who have not yet made a name to have a chance to show their work to boutique owners and potential investors.

"'Creatives' from Soweto do need their own platform," James said.

"If other fashion platforms cannot afford them that, they have to create their own."

Manzini acknowledges Soweto Fashion Week is an ambitious title for his three-day showcase of 16 designers.

Rehearsals were held in the parking lot and garden of a modest apartment borrowed from a tailor friend, in a northern Johannesburg suburb some designers found difficult to reach by taxi.

"We refused to be stopped because we don't have funding," said Manzini, who raised R60,000 from churches, business people and other sponsors for the event. His mother, a nurse, tapped her contacts and acted as chairwoman of the event, and is someone of whom he could bounce ideas.

Manzini is confident that in coming years, the event will grow to a full week and give many more designers an opportunity. He hopes to start his own business distributing designs that will first take the catwalk this week.

Soweto has long been known for its quirky sense of style, with designers splashing bright colours and urban sensibilities on everything from the latest silhouettes on European runways to reworkings of the dapper suits Nelson Mandela wore when he lived in the township in the 1940s. The older Mandela is best known for his relaxed but colourful shirts. But as a younger man, the son of a royal family was a political celebrity in Soweto, and dressed the part.

"The style that Nelson Mandela rocked in his day," and other looks from the 1940s and 1950s are popular among Soweto designers, said fashion writer James, who himself sports a shaved part in his hair, like Mandela had as a young man.

James, dressed on the day he was interviewed in a purple tartan bow tie and eye-popping blue shoes, also favours the bright colours and nerdy yet cool skinny silhouettes popularised by the Smarteez, a design collective from Soweto that has drawn international attention.

The designers in Manzini's shows aren't as recognisable as Smarteez. But the strikingly modern Soweto Hotel, one of Manzini's sponsors, has given them a classy stage with an evocative history.