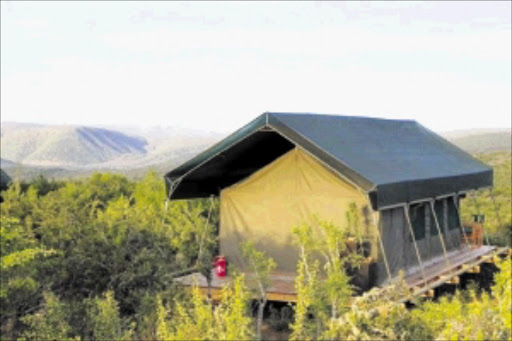 At Bucklands a couple can spend a night with all meals and a game drive included for the ridiculously low price of R999, which, believe me, is the bargain of the year

I MUST admit to getting a little bit nervous whenever I see the words "Private Game Reserve" in tourist brochures and adverts.

Not because I'm worried about ending up as a hors d'oeuvre for a ravenous hippo when visiting the resort, but more because the prices charged by these establishments will leave you feeling like a vulture has feasted on you until nothing is left.

Well, that's always been my opinion up until a recent visit to the Bucklands Private Game Reserve, just outside Grahamstown in Eastern Cape.

Admittedly it is not the easiest place to reach, being a three hour drive up the N2 from East London. But, boy, is it worth it!

Situated on 5500 hectares, Bucklands is relatively new as a game reserve, but its history is as varied as the game it is now home to.

Dutch immigrant Alfred Buckley was the first person to farm the region way back in 1865 and it was also the time of the Frontier Wars in which battles between the colonists and local tribes were fought.

Nearly 150 years has passed since those days but in a way the landscape is still exactly the same.

The beauty of the plains stretch for as far as the eye can see, with barely a sign of humankind fragmenting its beauty.

Since buying the farm in 2007, Michelle and Terry Stewart have set about turning a former goat farm into a game reserve of international standard.

You have a choice of accommodation at Bucklands - either a room in the main guest house or, if you wish to really get back to nature, a luxury tent.

The tents include a double bed and ensuite bathroom, so its not exactly as if you are roughing it. They appear to be very comfortable while my room in the main guest house was spacious, comfortable and nicely decorated.

A game reserve holiday is not for everyone. If your idea of "getting away from things" is visiting the mall, followed by a meal in a swanky restaurant, the bush is not for you.

If you are looking for solitude, beauty, nature and peacefulness that only the wide open spaces can provide, then this type of holiday is worth considering.

The food at Bucklands was typically good homemade fare.

Dinners consist of food like curries, stews or, on the night of my particular visit, lamb shank.

It was cooked to perfection and the accompanying vegetables - grown on the property - went down a treat after a two-hour game drive.

As I mentioned earlier, what gets my back up when it comes to private game reserves is the pricing.

I don't know whether it is the fact that certain establishments charge in excess of R10,000 for a night's accommodation or the fact that some people are willing to pay that amount that rattles my cage.

At Bucklands a couple can spend a night with all meals and a game drive included for the ridiculously low price of R999, which, believe me, is the bargain of the year and definitely one of the reasons why I will be going back.