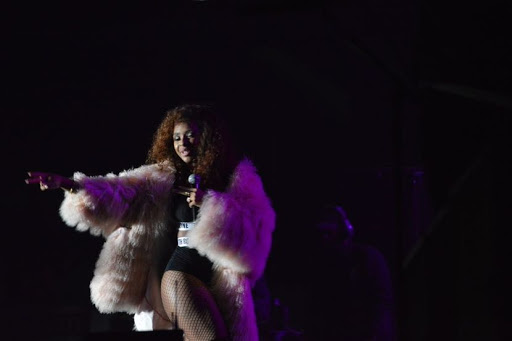 It took a sexy lass to save the Migos tour in Jo burg on Saturday night.

Boity Thulo jumped on stage to perform her song featuring Nasty C, leaving her admirers squealing with delight. However, the rap concert, promoted by music label Mabala Noise, failed to live up to the hype.

Fans who bought golden circle tickets for R790 were denied entry as their tags could not get printed due to poor crowd control and the weather.

There was one Golden Circle entrance and 1000 patrons had to go through check points to get barcoded tags. Meanwhile, revellers had to go through at least four sets of guards before reaching this point. As local act AKA was about to perform, an agitated crowd began pushing to demand entry.

Performances had to stop and nothing happened for two hours as security battled to contain the crowd. Fans in the arena had to sit on the dirty floor as they waited.

Mabala Noise A&R Sikhulile Nzuza confirmed that the show was stopped due to the unruly crowd.

“When the storm hit people who were outside started pushing the fence and the fence fell over and the girls at the registration table had to run and the security had to hold everyone back. They wouldn’t allow the show to go on because there would’ve been a stampede outside,” said Nzuza

Migos had fans singing along but Cassper Nyovest blasted them and Mabala Noise for failing to pack the 20000 venue.

He tweeted: “Bring that money here!!! We have the ideas and our ideas benefit South Africa so your you're actually investing the money in the Country!!!”