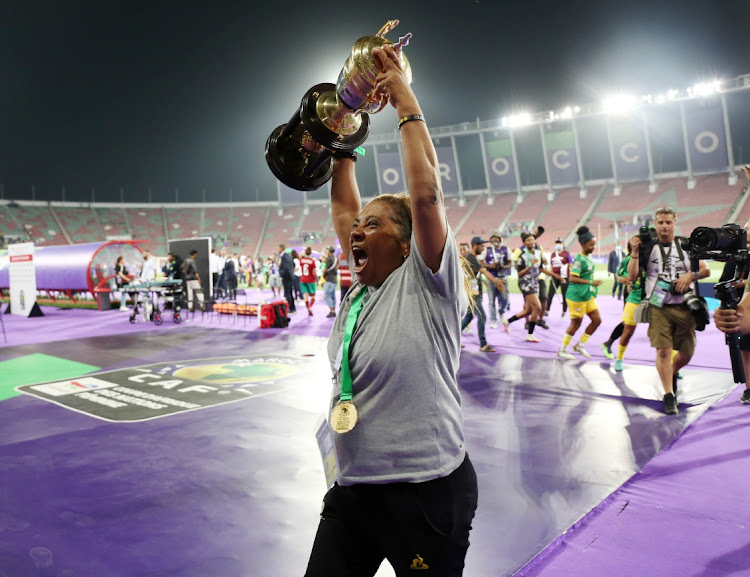 From playing soccer with boys in the streets of Salt River in Cape Town to lifting the illusive African champion's trophy as the coach of Banyana Banyana, Desiree Ellis has indeed come a long way.

It has been a journey of tenacity, hard work and perseverance that she never saw coming. Ellis was six years old at the time and she used to be teased by others of wanting to be a boy. The defiant young player was unmoved by naysayers because she had her parents' full support.

Recently, Ellis brought smiles to millions of South Africans when she led Banyana to their first Women’s Africa Cup of Nations victory two weeks ago. Her girls beat Morocco 2-1 in the final, leading to the girls in green and gold receiving a heroes' welcome when they landed at OR Tambo International Airport a few days later.

Since their landing,  the team has been parading with the trophy and even visited President Cyril Ramaphosa at the Union Buildings. Ellis has been part of the festivities. She caught up with Sowetan TimeOut before jetting off to Cape Town to celebrate with her relatives.

“I have not had time to be myself. It [the win] has not sunk in yet. I think we [the team] don’t realise the magnitude of the win until you get to speak to people and see what is happening around the country. The win is for all women in sport and the country. We knew that the country was watching each and every game. And the girls knew what they were playing for.”

Like a true victor who made history, the 59-year-old could have been blowing her own horn if she wanted, but instead she credits the success to all players who have ever played for Banyana Banyana, different coaches and support from Safa.

“The win is a team effort. It is for everyone who has been part of this team before and now. From drivers who drive the players around to administration staff. When you build a house you require bricks, windows and tiles. So, we can never forget players who played for Banyana Banyana before and coaches. They did a great job. Even the people who book flights  played a part in this success.”

Moving beyond the win, the meticulous coach is already speaking about preparing for Fifa Women’s World Cup in Australia next year in July. She explains that she hardly gets time to let her hair down. Ellis, who is not married and does not have children, spent most of her time researching the latest trends in football about players and ideas to better her team. She tells TimeOut that she only reserves December and January to spend time with family in Cape Town.

“There is no moment to rest. Look at the players; some played this past weekend in their teams and those playing overseas have gone back to their clubs. Currently, I am busy with the report of the tournament, which will take me time to finish. But I have started to prepare for the World Cup because we want to do better this time. Women’s football is growing around the world and we have to move on with times. We need to do better in group stages.”

Ellis, an introvert of note, spends most of her time enjoying her own company. She loves music but going to live music venues and nightclubs is not her scene. If she is not watching her church service online, she is on her phone doing more research

“I always have my laptop around me. I love listening to music and watching live concerts online. When I am in Cape Town I spend a lot of time with my family and nephews. I enjoy braaied meat with friends and family.”

Ellis fell in love with football at a young age and has played for many soccer teams in Cape Town and Banyana Banyana. She said she was fortunate to have played for Banyana, captained the team and even coached it. When she was younger she aspired to be a lawyer.

“When I was young I realised that my parents would never afford to pay for my fees since we were five at home. Instead, I focused on playing and being involved in football administration until I ended up here. I am grateful that my parents caught up early that soccer was not only a sport for boys but for girls too.”

Ellis has played for teams like Athlone Celtics, Wynberg St Johns, Joyce's United, Albans City and Spurs Ladies. She made 32 appearances for Banyana and scored six goals. Her highlight was playing her first game in 1993 against eSwatini. She praises the group of players she played with like Annah Monate, Sibongile Khumalo, Joane Solomons, Veronica Phewa and Khabo Zitha, among others.

“Khabo was one of the most skillful players and I marvelled at her talent. When she played I felt like stopping everything to just watch her. And Portia Modise came and was full of talent and a confident player.”

As a coach, one of her highlights was watching her team scoring 17 goals against the Comoros in 2019.

Top favourite songs: How Great Is thy God, Mother’s Prayer and Back At One

The Banyana Banyana squad’s victory of Wafcon is a demonstration of self-driven hard work against the many odds that  women’s sports and their ...
Opinion
2 weeks ago

Parliament is concerned that the SA Football Association (Safa) has no money to pay Wafcon champions Banyana Banyana their promised bonuses.
News
2 weeks ago

The 23 Banyana Banyana players who helped SA win the Women’s African Cup of Nations (Wafcon) title for the first time have been blessed with an ...
Sport
2 weeks ago

Banyana Banyana defender Nomvula Kgoale feels bold when wearing her favourite rouge lipstick during a game on the soccer field.
Sport
3 weeks ago
Next Article