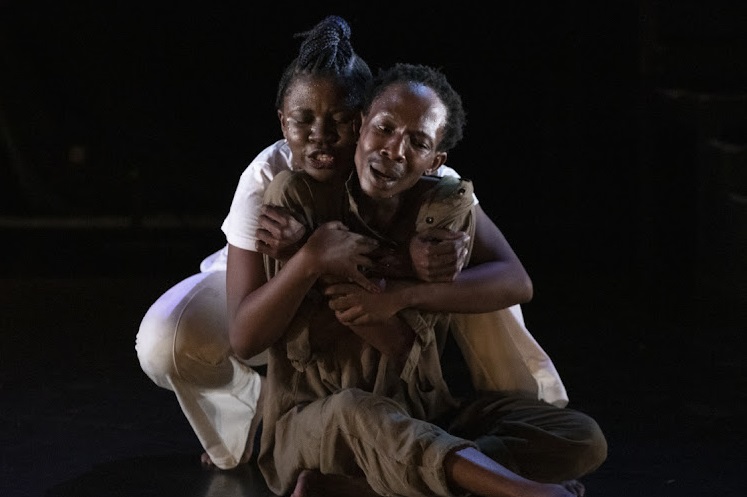 Liyabuya Gongo and Thami Tshabalala in the play called Isenyuso that is onstage at Soweto Theatre until Saturday.
Image: Supplied

Soweto-born choreographer and dancer Thamsanqa “Thami” Tshabalala explores the impact caused by Christianity and missionaries to the African culture and heritage in his latest dance work Isenyuso (Ascension).

Through his latest contemporary piece that is on stage at the Soweto Theatre in Jabulani until tomorrow, he interrogates issues of spirituality, lineage and religion. Tshabalala explores these subjects through electrifying fusion movements and texts.

The piece, also featuring Liyabuya Gongo as a dancer, is directed by Siphumeze Khundayi. Isenyuso was staged last month at the South African State Theatre in Pretoria for Kucheza Festival where it received a positive response.

Isenyuso was inspired by a painting that Tshabalala saw at a gallery in France which depicted a black man, figuratively carrying a brief case.

The same painting came to mind when he read Chinua Achebe’s novel Things Fall Apart which was first published in 1958. The novel looks at pre-colonial life in Nigeria and the invasion of Europeans during the late 19th century.

The story chronicles the life of Okwonkwo, an Igbo man and local wrestling champion in the fictional Nigerian tribe of Umofia. He was empowered by the notion of superiority and toxic masculinity which became his downfall and led him astray from the genuine essence of being his true desired self.

Tshabalala said Achebe’s novel reminded him of how black men have to carry the burden of keeping up with traditions, societal norms, family expectations and never show a sign of weakness. As a queer man, Tshabalala brought the situation closer to home of how queer men are constantly expected to conform to societal expectations.

“Isenyuso is a contemporary dance work that details a global narrative of individual justice, liberty, representation and the preserving of heritage. It is told through the lens of a new age man supported by his history. Audio visuals are utilised during the performance and accompanied by conversational movement, and choreography is used to express the words with a modern sound.”

In explaining the idea of the show, Tshabalala said: “I looked at this man in the painting and saw him carrying hopes of his family in this briefcase. This resonated with me because I saw myself in this picture. Being a queer man of colour living in a society you encounter these unreasonable expectations where you have to balance being true to your roots and the importance of tradition. This relates to a lot of young black boys as well. I want to address the way we are raising our boys to become men.

“While working on the piece I was reminded of what the late Archbishop [Emeritus] Desmond Tutu said about missionaries and Christianity. He said missionaries came to Africa and found us believing in our own gods and practicing our own culture. They taught us to close our eyes when praying and when we opened them a lot was gone. Through my work I try to encourage people to know who they are and where they come from.”

Tshabalala, who has just returned from a long tour in Austria with internationally acclaimed Dada Masilo, has been creating his own works in between international tours. He created the dance piece called Simon which received critical acclaim at the relaunch of the 2019 Dance Umbrella. The piece went on to feature at Pace Festival and the Solo and Duet Festival at the Soweto Theatre where it was nominated in the Best Contemporary/Ballet Production at the Naledi Awards 2020.

Tshabalala, one of the greatest products of National School of the Arts in Braamfontein, further studied dance at Tshwane University of Technology. He co-choreographed the Standard Bank Ovation award- winning work Sins that premiered at National Arts Festival in 2013.

He further co-choreographed I Am alongside Khaya Ndlovu for the National Arts Festival in 2016. In 2015, he choreographed a work for the South African Gymnastics team for the World Gymnastrada competition in Finland. He also produced Vibrations of Us for KMAD’s season Next Generation 2 in Pretoria in 2016 which won the Kyknet Prize for Best Physical Theatre Production at Krekvars Student Arts Festival.

When Nambitha Ben-Mazwi told a friend she was gunning for Netflix next at the Queen Sono launch in 2019, little did she know that three years later ...
Entertainment
2 weeks ago

SA more than Makeba or Mbulu, Zoe Modiga out to prove

Award-winning singer Zoe Modiga hopes that being announced as the only female from SA to perform at this year’s international North Sea Jazz Festival ...
Entertainment
1 month ago

Internationally renowned choreographer and dancer Luyanda Sidiya wants to capture imagination of dance lovers when he presents two of his works at ...
Entertainment
1 month ago

Watching siblings in rivalry is always fascinating. But an all-girl sibling rivalry adds a cherry on top. It is over-exaggerated, petty and ...
Entertainment
1 month ago
Next Article