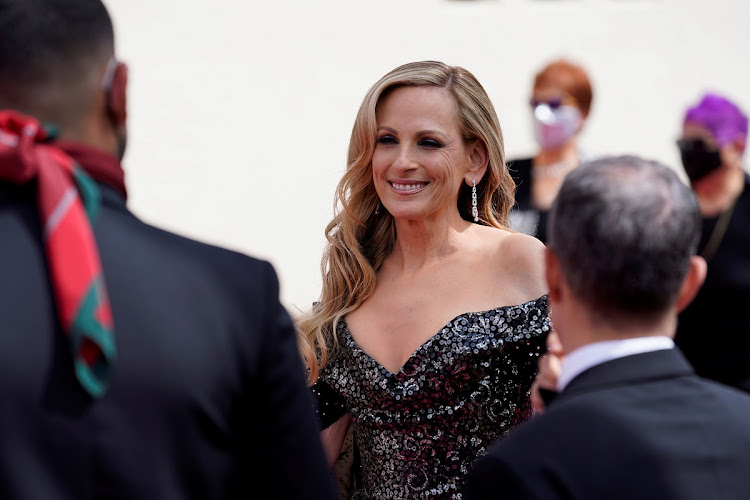 Marlee Matlin, the only deaf performer to win an Academy Award, plays a deaf mother in the film 'CODA'.
Image: Chris Pizzello/Pool via Reuters/File Photo

A dark Western, The Power of the Dog, will battle feel-good deaf family drama CODA for the film industry's top honour on Sunday when, free of last year's pandemic restrictions, a large Hollywood crowd gathers for the Academy Awards.

The films are front-runners for the best picture trophy at a red-carpet Oscars ceremony promising a few plot twists. Among them: a win by either movie would mark a milestone by handing the statuette to a streaming service.

Netflix Inc released Power of the Dog while CODA streamed on Apple TV+.

After past complaints about a lack of diversity, two of this year's four acting accolades may go to people of colour. Will Smith is likely to earn his first Oscar for King Richard, awards watchers say, as is Ariana DeBose for west Side Story.

Comedians Amy Schumer, Regina Hall and Wanda Sykes will host, and it is the first time three women have guided the ceremony in its 94-year history. Beyoncé and Billie Eilish will perform.

In a bid to draw more viewers, especially younger ones, after years of declining ratings, the three-hour show starting at 8pm. ET (00:00 GMT) will add two awards, the result of fan votes on Twitter for favourite film and scene.

The ceremony, broadcast live on Walt Disney Co's ABC, will also feature a moment of support for Ukraine. Producers want the show to be celebratory but said they could not ignore the crisis there.

In the best picture race, success hinges on whether the 9,900 members of the Academy of Motion Picture Arts and Sciences back a gothic psychological thriller or an uplifting story.

“The pundits have always said you never know who's going to win,” said People magazine movies editor Nigel Smith. “This year, it actually seems to be the case.”

Dark Western “The Power of the Dog” led this year's field of Academy Awards contenders on Tuesday with 12 nominations for the Netflix Inc film, ...
Entertainment
3 months ago

Power of the Dog, starring Benedict Cumberbatch as a repressed cowboy who torments his brother's new wife, outpaced all movies with 12 nominations. It had been considered the leader until CODA landed top honours from the Screen Actors Guild and Producers Guild.

CODA tells the story of a hearing girl who serves as interpreter for her deaf family but longs to pursue a career in music. CODA is an acronym for “child of deaf adult.”

“I really haven't spoken to anyone who doesn't like CODA,” Smith said.

A traditional Hollywood studio could score an upset.

Awards experts give an outside shot to Kenneth Branagh's Belfast, a film inspired by his childhood in Northern Ireland at the onset of the sectarian conflict known as the Troubles, or Steven Spielberg's west Side Story remake.

Best actress is the most unpredictable. Many experts say Jessica Chastain's portrayal of TV evangelist Tammy Faye Bakker will triumph, though some give the edge to former Twilight vampire Kristen Stewart for playing Princess Diana in Spencer.

While the acting field is not as diverse as last year's, “it is certainly better than what we saw a few years back with #OscarsSoWhite,” said UCLA dean of social sciences Darnell Hunt, co-author of an annual Hollywood diversity report. “The academy has taken important steps forward.”

Award-winning South African film Lakutshon’ Ilanga (When the Sun Sets) is tipped for more accolades this year.
Entertainment
3 months ago

In supporting actor categories, Afro-Latina actress DeBose is expected to prevail her portrayal of Anita in west Side Story. CODA star Troy Kotsur could make history as the first deaf man to win an Oscar.

Jane Campion also could become the third woman in Oscars history to win best director for Power of the Dog.

After a scaled-down ceremony at a train station last year, the Oscars have returned to the Dolby Theatre, which will be filled to about three-quarters capacity with 2,500 guests, allowing for some distancing.

To streamline the show, winners of eight categories such as editing and sound will be announced before the live broadcast. Their speeches will be edited into the telecast. Spielberg and others criticised the move as an insult to film craftspeople.