Shai's wife urges people not to judge him too harshly

Actors share how he allowed them to stand on his shoulders 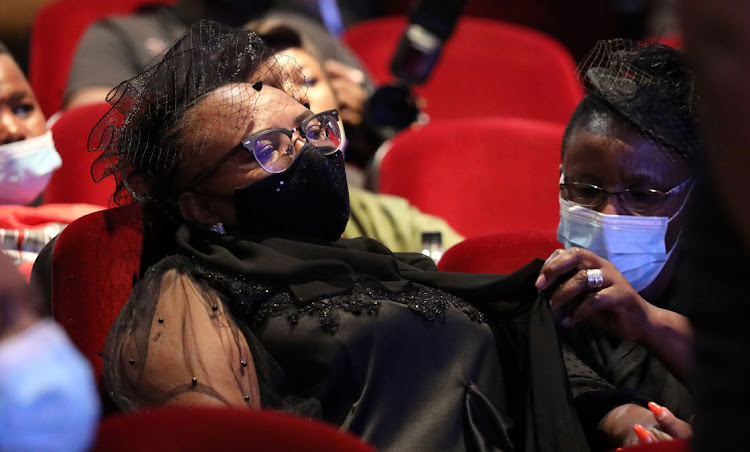 Masechaba Shai, the wife of the late veteran actor Patrick Shai at the Market Theatre in Johannesburg during his memorial service.
Image: VELI NHLAPO

The wife of seasoned TV and stage actor Patrick Shai has pleaded with his children not to take what the public say about their father seriously.

Masechaba Shai was speaking at a memorial service for her husband at Market Theatre in Newtown, Johannesburg on Thursday.

It was a celebratory service where people laughed easily and danced as speakers praised the actor for his generosity.

Shai told her children not to allow social media to define their father who was found dead on Saturday.

“My kids, don't take serious what people say about your father because you know him. He was no saint. I am not a saint and you are also not innocent but still, he was a human being. South Africa, let us forgive because God forgives all of us all the time.

“I am not an actor, I am realist. I am not a robot but a human being. I am not crying but crying for my kids and I don't know how are they going to recover from this. Patrick was like a child, he played a lot. I called him Ntwana.

“I am humbled by the support and love that you have been giving us. Patrick behaved like a child and my job was to ground him. I want to say all of you judging him, you need to start judging yourself first. This pain is very deep for my kids, for my grandkids it is so deep. He carried us. We were not perfect and he was not perfect. All the challenges affect all of us, he faced all those challenges.”

Shai said she used to be a victim of the legendary actor as he abused her physically.

She said when he came out in public about being a perpetrator (of gender-based violence), the whole family was hurt.

“He was a perpetrator like all of you in this place. I was never intimidated by the beautiful women who became the wives of my husband. When he said 'I am sorry', he meant it. My kids are hurting because of the country that my husband loved.

“Yes, I stayed in the marriage. It was because I did not want to confuse my kids in spite of who their father was. I packed [my bags] many times, wanting to leave. When he pleaded and cried I would say 'I hope you are not acting'. Him being an activist was not an act.”

Thami Madondo, who worked with Shai at the Khuluma Ndoda organisation, said the thespian used to cry when he listened to different cases of gender-based violence and console himself by playing Nathi Mankayi's song Imibuzo.

The two drove around the country trying to help different communities.

Madondo said: “It is not a time to mourn but celebrate Pat's life. He was a colourful person. He used to say 'where the red tape around me exists, I will soldier on'. He was a loving human being and worked hard to assist people. He was a man of peace. He always lamented that the issues of GBV are deep and complicated.”

Seasoned actor Lucky Legodi said: “To his wife Masechaba, that is not your name but your title. I thank you for everything, for what you have done for him. I knew Pat for many years. Patrick used to come to my organisation and teach kids how to act on stage and TV. He loved jokes and won many awards during the apartheid times.”

Actor Nambitha Mpumlwana said: “I have known Patrick for many years. I have played his wife a few times in different shows. He  was not afraid to be the target so that we can rise. He allowed us to stand tall on his shoulders. He did not seek [the] spotlight, it followed him.”

A weeping Motshabi Tyelele said she has known Shai long before she came to the acting industry: “I was in boarding school in Swaziland and he came with a cast of Sophiatown Theatre. By the time I came back to SA he was my big brother. Bra Pat taught us respect and nature.”

Bonga Percy Vilakazi, one of the producers of award-winning telenovela The River, said the show was fortunate to work with a person of Shai's calibre.

“From the time we wrote the character it was specifically done for him. We wanted him and Seputla [Sebogodi] in one space. He took on the role and delivered a master class. Off camera he was so welcoming and warm.”

Musicians such as Hush SA, Zaza, Cannon Nyati and Takkie Ndou performed at the service.

Hundreds of people gathered on Thursday afternoon to celebrate the life of seasoned TV and stage actor Patrick Shai at a memorial service at the ...
News
3 months ago

The trial of Ntuthuko Shoba, accused of killing his pregnant girlfriend Tshegofatso Pule, was on Monday set to start in the high court in ...
News
3 months ago
Next Article