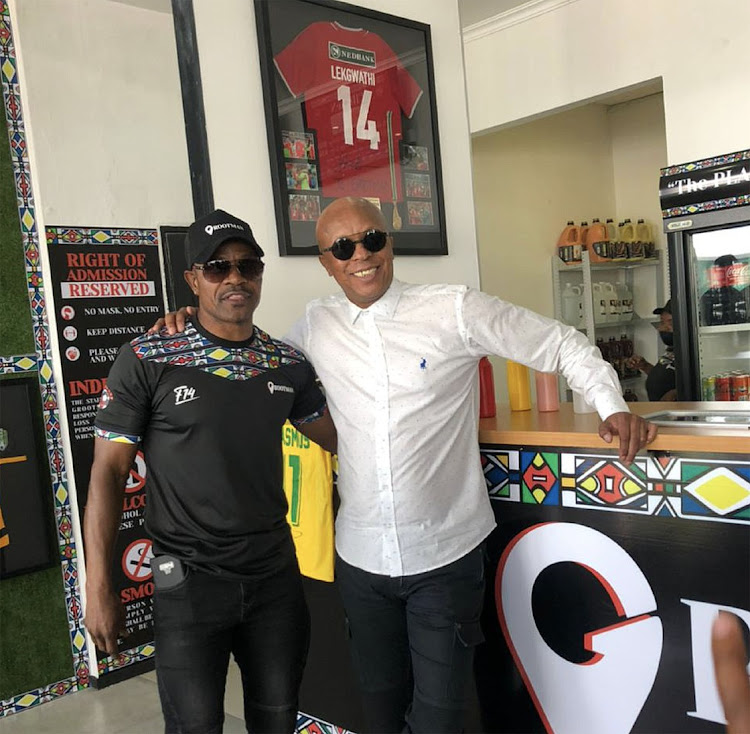 Lucky Lekgwathi and Doctor Khumalo at the reopening of his restaurant,Grootman at Southdale Mall in Johannesburg on Friday.
Image: Reza Amod

Former Orlando Pirates captain Lucky Lekgwathi’s restaurant has finally reopened after it was looted and vandalised during last year’s protests.

Lekgwathi is grateful for the support he received from the public after his restaurant was looted in July.

The 44-year-old managed to raise money to get the popular restaurant back up and running through donations from the public and business people.

“They were so generous to donate that money and help me rebuild the restaurant.”

Grootman, which used to operate in Kliptown, Soweto, was reopened in Southdale, southern Johannesburg, on Friday with a lot of soccer and television stars in attendance. Among those in attendance were Kaizer Chiefs legend Doctor Khumalo, Reneilwe Letsholonyane, Tshepo Maseko and Edward Motale.

Lekgwathi’s business partner Reza Amod said: “After we got looted, there was such a big outcry from the public saying that they want to assist us to reopen. We took the decision to move the restaurant from Kliptown to Southdale after we realised there was more support from the community coming from there.

“We do a lot of work through the Lucky Lekgwathi Foundation in our community and they all stepped up to assist us. The support in the south where we live was quite huge. Another reason for our relocation was that we wanted to come back bigger and stronger. We then needed a bigger space where we would have a bigger kitchen and sitting area,” he said.

In July, Lekgwathi told Sowetan how the savings he had made as a soccer player went up in smoke when the looters raided the restaurant. It was one of many businesses that were forced to close in the looting spree which shook Gauteng and KwaZulu-Natal.

Residents of Kliptown have started lending a hand to one of their favourites businesses which was vandalised and looted last week.
News
9 months ago

Today we launch the #SowetanRebuild initiative, a call to action to begin the process of restoring small businesses and economic centres that bore ...
News
9 months ago
Next Article