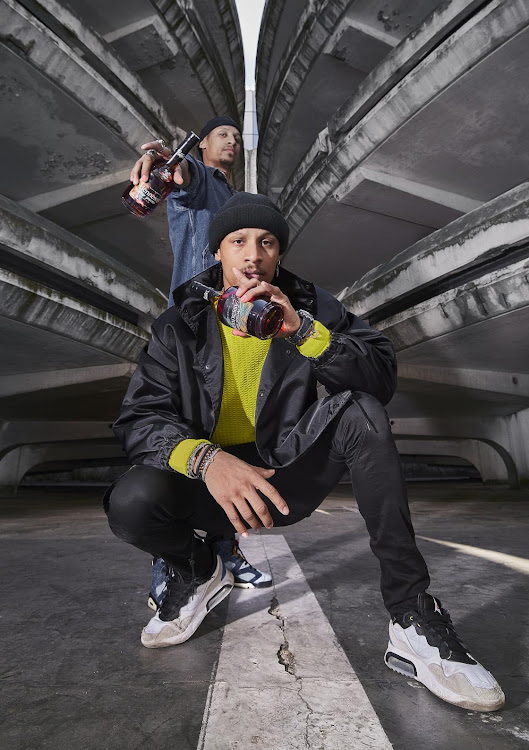 French urban dancers and identical twins Laurent and Larry Nicolas Bourgeois, fondly known as Les Twins, have shaken up the hip-hop scene by breaking it down and freestyling for powerhouses Beyoncé, Meghan Trainor, and Missy Elliott.

But perhaps winning American reality competition show World of Dance, produced by Jennifer Lopez, in 2017 is what turned them into household names.

Les Twins are now receiving their biggest validation yet – and doing it for all dancers across the world – by collaborating with one of the biggest alcohol brands in the world having designed a limited edition bottle. The 32-year-old performers tell Sowetan how the latest move further cements their cultural footprint and takes their star power to new heights.

Do you see this new collaboration with Hennessy as a huge career milestone?

Laurent: Yes it is. It’s very exciting to see dancers collaborating with such a brand as big as this. It means we are doing great things and on our way to the top and in the process of doing many more things such as this.

What is next after this?

Laurent: We don’t usually say what might come in the future because everything just comes too fast but what I can say is that we appreciate a lot that’s happening in our lives. Obviously, we do have many things lined up but you will know them when the time comes.

Was it hard to keep such good news a secret?

Larry Nicolas: We have known about this for close to two years. One thing about me is that I never keep secrets and having to keep this to ourselves was hard but worth it. See, when we were approached, it was hard to picture liquid in motion form. So, we had to have the right idea.

Laurent: We are pretty loud performers when we’re on stage. If you were to ask me to put colour on the wall, it would be loud. The reason behind us doing this collaboration was for people to understand how far we can go together. We didn’t want to do a simple commercial that isn’t memorable. We wanted to come in with so much more [from] design, concept, and more than just a drink.

What was a standout moment for you in these two years?

Laurent: There’s no moment I didn’t like… because we knew how it was going to turn out. We were just excited at how it would look like in reality. We had already imaged everything although we wanted a whole bunch of things but to finally touch the final product was mind-blowing.

Now that the final product is here, what is the biggest takeaway?

Larry Nicolas: It is knowing that we are capable of doing so much more. When I see something such as this like a bottle that has my name written on it, is history on its own. It simply says we as Les Twins did it.

Why do you think more big brands are collaborating with urban artists than ever before?

Larry Nicolas: One thing I can ask is “Are people scared of the new era?” Something people don’t understand is for a superstar as big as Beyoncé to do something with Adidas, a liquid brand or anything she touches, it would be of top priority and people would pay attention. Whatever collaboration it is, it will become known as Beyoncé’s brand. The new era is now seeing a lot of artists partnering with huge brands, infusing a different form of branding.

The King of Gqom, DJ Lag, has blended his uncanny ear for a melody, high-spirited Zulu heritage and heavy bass beats in enchanting the global sonic ...
Entertainment
7 months ago

Musician Lady Du says there was no pressure to follow in the footsteps of Idols SA judge Somizi Mhlongo after she was the first celebrity guest to ...
Entertainment
8 months ago
Next Article