Mtshiselwa told Sowetan she will have the same job for Viola Davis and Thuso Mbedu’s upcoming film The Woman King set to also shoot in Cape Town later this year. 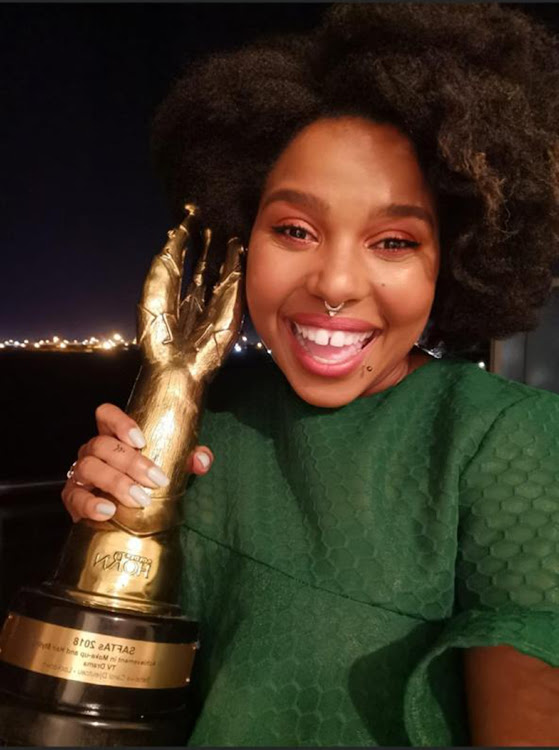 Babalwa Mtshiselwa with one of her five Safta trophies. International gigs have lined up for her.
Image: SUPPLIED

Babalwa Mtshiselwa has transitioned from being a receptionist to make-up and hair head of department (HOD) for Christina Milian’s new film Resort to Love.

But that’s only the beginning for the 33-year-old from Langa in Cape Town with a list of international gigs lined up.

She is currently working as make-up and hair HOD for the second season of BBC One drama series Noughts + Crosses, starring Bonnie Mbuli and Masali Baduza.

Mtshiselwa told Sowetan she will have the same job for Viola Davis and Thuso Mbedu’s upcoming film The Woman King set to also shoot in Cape Town later this year.

Starring American actors Milian, Jay Pharoah and Sinqua Walls, Resort To Love was produced by Alicia Keys. It was filmed in Mauritius last year between September and December.

Mtshiselwa first received the call from the production company last year July to send her portfolio. Before long, she had an interview with the director and another Zoom meeting with Milian.

“She told me she was given the right to pick up the make-up artist and she wanted to work with me. It felt like I was in a dream,” Mtshiselwa said.

“I had to pinch myself every day. It was in paradise. We were blessed and we got to stay in the best hotels in Mauritius for that period.”

On March 30 2015, Mzansi woke up to the best news ever – then novice SA export Trevor Noah was to replace American late night TV titan Jon Stewart ...
Entertainment
3 months ago

Mtshiselwa is fresh off a double win at the SA Film and Television Awards (Saftas). She won for her work in Trackers and How To Ruin Christmas. Mtshiselwa has five Safta wins in total – two for Lockdown and one for Knuckle City. She has been nominated 10 times in the last five years.

“I wasn’t expecting three nominations at the Saftas this year and two were in the same category. That was exciting and I couldn’t believe it,” Mtshiselwa said.

“To win two was just like, ‘what on earth?’. Everything just feels spiritual right now. Looking at what I have been through in the industry, all of these is a reminder to keep pushing.”

After graduating from her human resources management course in 2009, Mtshiselwa worked as a receptionist for a film project and fell in love with make-up. From there she worked as a trainee and eventually assistant on many film sets in Cape Town. In 2016, she moved to Johannesburg and scored big when she was hired make-up and hair HOD for season one of prison drama Lockdown.

“All of these is a blessing and unbelievable. I constantly try to build the industry and not just myself and change how things have been,” Mtshiselwa said.

“I started in Cape Town, where the industry is not inclusive to black people. After going through so much I left in pursue of local work, instead of the international work I was assisting on in Cape Town. I felt invisible... and growing myself locally, it has paid off.”

Jolie and Gibson give David Oyelowo a few tips

Hollywood actor David Oyelowo is making his feature directorial debut and sought the advice of heavyweights Angelina Jolie and Mel Gibson who have ...
Entertainment
3 months ago

In the last 10 years, Bonang Matheba has not only owned “champagne darling” but she defined television, radio and social media – pop culture was ...
Entertainment
3 months ago

Scandal!'s Nomvelo proud of her journey and growth

After joining Scandal! as a teenager, Nomvelo Makhanya has grown into a woman playing the character of Lindiwe Ngema.
Entertainment
5 months ago
Next Article