Trans activist and reality TV star Yaya Mavundla was last week triumphant when she received her updated ID number that recognised her as female after an arduous process with home affairs.

But what does her victory mean for the trans community at large?

Mavundla, who appears in Mzansi Magic show Becoming, told Sowetan that the above question has been running on her mind a lot in the last few days.

“After I posted on social media [that I got my new ID number], I was flooded with requests from trans people asking me of the process and some telling me how long they have been waiting,” Mavundla said. 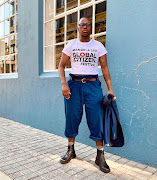 Image: Instagram Nino Maphosa said Mavundla’s victory gave him and others in the community hope that they will also get updated ID numbers.

“Imagine me having complications getting this done, then what about an unknown person that doesn’t have a voice? If they are able to assist me, then let them assist other trans people. I have suggested a press conference in which they thoroughly explain to everyone all the requirements and alternatives for those that don’t meet those requirements.”

Mavundla submitted a medical report from her doctor and a supporting letter from a psychologist to get the process started at home affairs in November. A fee of approximately R200 was required.

According to Mavundla, public hospitals have a long waiting list, so it’s close to impossible to get such a report.

Consultation at her private doctor cost her R850.

Mavundla was told that it will take three months for home affairs to process her updated ID number, but she waited over six months.

“The first challenge was that I needed both my parents’ ID numbers, but I didn’t have my mother’s ID number,” Mavundla said.

“In March, I reached out to them and then a conversation about missing documents started – that my mother’s ID number was still required. I put a scenario of what if the trans person had transphobic parents and they chased them away from home.

“Then it was suggested that I must obtain an affidavit and they will then process my application. At some point the woman that was supposed to process everything was on leave.”

Mavundla this week plans to go apply for her smart ID card. Her names on the card will be Yaya Nonhlanhla Sphiwe Mavundla.

Nino Maphosa, a trans man, said Mavundla’s victory gave him and others in the community hope that they will also get updated ID numbers.

Maphosa applied for his updated ID number in September and when he followed up in January, he was told that home affairs doesn’t have his application. He was then advised to reapply.

“They only required two doctors’ letters and one from a psychologist. But now I’m informed they also need both parents’ ID numbers and I didn’t have those,” Maphosa said.

“Right now I’m struggling to get an apartment because my ID says I’m female. I can’t go to my bank to inquire because they require my ID document that recognises me as a female. My life is at a standstill.

“Going to the police station to obtain an affidavit is more traumatic for me because I have to start by explaining what is transgender. I’ve been told ‘we don’t do those kind of affidavits’.”

Home affairs spokesperson Siyabulela Qoza said Mavundla is not the first transgender person to get their updated ID number and nearly 40 applications were processed in the 2020/21 year.

Qoza said the applicable fee ranges between R70 and R385, depending on the amendments the applicant wants to make.

“[They should] submit medical report from a medical doctor who performed the surgical or medical treatment resulting in gender reassignment, stating the nature and results of any procedure carried out,” Qoza said.

“A second medical report from a different medical practitioner who performed the procedure, or psychologist which examined the applicant in order to establish his or her sexual characteristics [is also needed]."