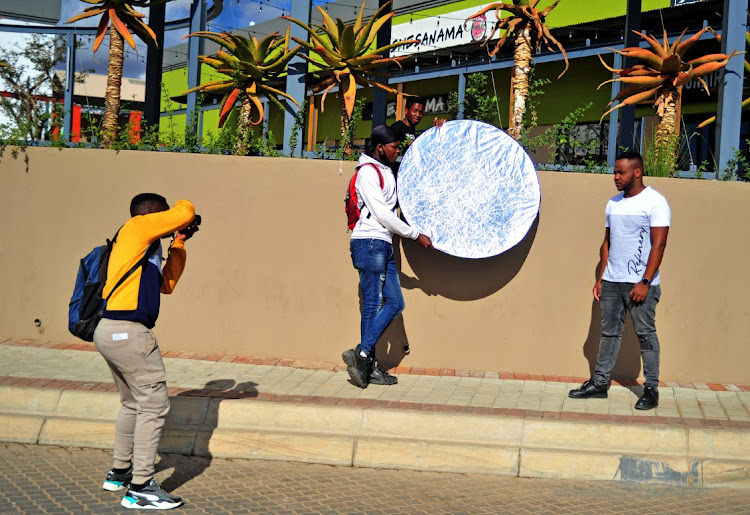 Thabiso Matjila prepares to take a picture of a client at the Paledi Mall in Turfloop near Polokwane. He is one of a legion of youths using photography to make a living across rural Limpopo.
Image: Lucas Ledwaba/Mukurukuru Media

When Khangwelo Masindi, 26, could not find a job after completing a certificate in information technology (IT), he sold his laptop and bought a camera.

Being the last born of seven siblings and was raised by a single parent who depends on the older persons grant, Masindi matriculated in 2016 with a bachelor’s pass but due to lack of funds, he could not go to a college of his desire to study towards a traffic officer’s course.

But in 2017, he managed to register for a one-year IT certificate at iCollege.

Armed with second-hand camera he bought for R4,000, Masindi set out to establish a photography business at Thavhani Mall in Thohoyandou.

“I just could not go back home and sit without doing anything. I have been renting a room at P-West around Thohoyandou,” he said.

Masindi charges R10 a photo and has rates for weekend bookings to shoot parties and other events. He hopes to save enough money so that one day he can buy an equipment and register a media company that specialises in photography.

The trend of youth taking up photography to earn a living is sweeping through Limpopo’s small towns, from Thohoyandou, Turfloop, Giyani to Jane Furse, which have in recent years seen the development of shopping malls and large retail shopping centres.

Once a major business, street and social photography declined with the introduction of cellphone cameras in the early 2000s. But the enterprising youth in Limpopo are now reviving it, operating in the parking lots of shopping malls.

Turfloop-based photographer Thabiso Matjila said photography has changed his life for the better.

“Photography helps me to be independent and also forms part of marketing my business. The more I go there [Paledi mall], the more I get more customers,” he said.

“Since I chose it, I see progress in my life and it also makes me feel like I am man enough to provide for myself. I also want to create employment through it,” he said.

Matjila said a lot has changed since he is now able to be booked far from Polokwane. “Travelling has become part of my life because I get booked every weekend,” he said.

Mpho Nemushungwa from Mukula Tshapala, outside Thohoyandou, started photography when Thavhani Mall first opened its doors in 2017, the same year his only surviving parent passed away.

“When my mom passed away I was in grade 11, and since there was no one who could assist me financially towards transport fee, I decided to drop out,” he said.

Nemushungwa is a self-taught photographer who credits his skills from fiddling with old cameras with a friend while growing up.

His day usually starts at 9.30am and makes around R100-R150 a day depending on how busy it is. Nemushungwa and two other photographer colleagues have formed a stokvel where they take turns contributing R1,000 to a member at the end of each week.

“The money really comes in handy as I am able to buy items for myself and also get to pay rent,” he said.

Livhuwani Netshiungani commutes between his home in Tsianda village to Thavhani Mall for R15 on a daily basis. “I matriculated in 2016 and for two years, I was not in school due to lack of funds,” he said.

“I then realised that I could generate an income from street photography in April 2019,” Netshiungani said.

In 2020, Netshiungani managed to register for an IT certificate while juggling photography. “Due to Covid-19, I could not attend classes the whole day. I would have classes in the morning and in the afternoon, I would then head to this side [Thavhani Mall] to take pictures,” he added.

In a good month, he can make about R4,000 – but the work isn’t without challenges. Sometimes potential customers can be outright rude when approached.

“I have learnt to accept that such things will always happen but I should never give up because it is what makes me have food at the end of the day,” Netshiungani said. – Mukurukuru Media

Neville Ngomane (20) from Bushbuckridge, Mpumalanga, is achieving his dreams after winning a prestigious award for young photographers.
SebenzaLIVE
1 year ago

Some of our country’s first bridges were built upon books.
SebenzaLIVE
1 year ago

You can now buy and sell visual art online at Artify, the Hilton Arts Festival’s online art gallery.
SebenzaLIVE
7 months ago
Next Article