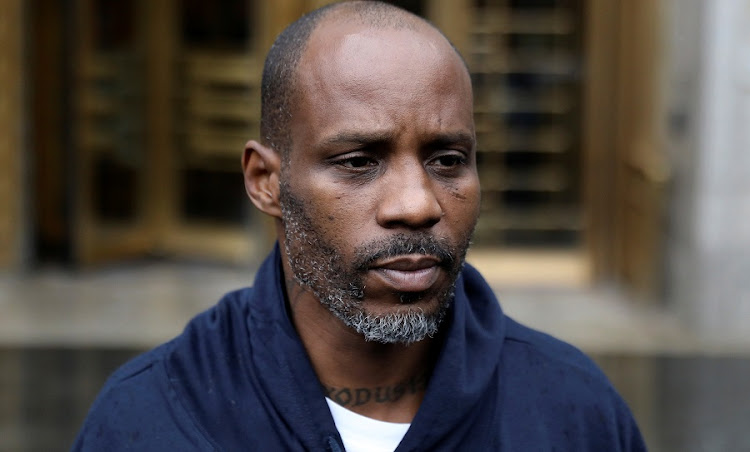 Fans have showed their love and support for rapper DMX, who is currently in hospital.
Image: REUTERS/Brendan McDermid

Fans have rallied together to host a vigil outside White Plains hospital, New York, where rapper Earl “DMX” Simmons is on life support after suffering a cardiac arrest.

According to international reports, the Ruff Ryder's Anthem hitmaker was recently hospitalised after a heart attack. He was rushed to hospital after he collapsed in his home.

The cause of his cardiac arrest has not been confirmed and the 50-year-old star remains in ICU in critical condition.

News of the rapper's hospitalisation left rap lovers shocked, resulting in droves of fans camping outside the hospital to show support.

In video clips making the rounds on social media, devoted supporters can be heard chanting “DMX”, praying for his recovery and playing his best hits. Hospital staff are also seen joining in the vigil.

People are outside of DMX’s hospital playing music 🙏 pic.twitter.com/bDtOAGSJTh

A DMX prayer closing out the prayer vigil was a moment 🥺🥺🥺 pic.twitter.com/8WozXAOSHa

Speaking about DMX's condition,  long-time lawyer and representative Murray Richmond told TMZ this was just another battle the star has to conquer.

“The Simmons family appreciates the overwhelming outpouring of heartfelt love, encouragement, support and prayers for Earl. Earl is someone whose life and music have been a source of inspiration and strength to so many people about the world. It is reassuring to see his fans return that same passion and energy to him during his time of need.”

Celebs and fans alike have also taken to social media to wish DMX a speedy recovery.

The likes of LeBron James, Mariah Carey and Missy Elliot also shared their thoughts on the situation, check out the comments below:

To one of my fav artist growing up and still to this day DMX, my prayers are with you and sent to the almighty heaven’s above! 🙏🏾❌

"Just to say how blessed I am to have your voice near my voice
Your truth tellin
Righteous yellin
Saviour sellin self
Is an inspiration and very much a good vibration
Hope we get to realization
some day soon…
DMX IS THE BMX”
….
Bono
Prayers this Easter Monday for DMX

Still Praying for you X🙏🏾 https://t.co/ZtLhQIGiTp

Today there’s a prayer vigil for #DMX if you are in the New York area send your prayers and support. 🙏🏾 #PRAYERFORDMX pic.twitter.com/IRFlgOKs86

Praying for a full recovery for DMX 🙏🏽💙🙏🏽💙 pic.twitter.com/oiJbCyNW5O

Many prayers to DMX & his family. we are pulling for you! pic.twitter.com/5EttwMtEgR

Showing love and support for DMX today. Lifting him up in prayer 🙏🏾 pic.twitter.com/Fj2BzLcHCq