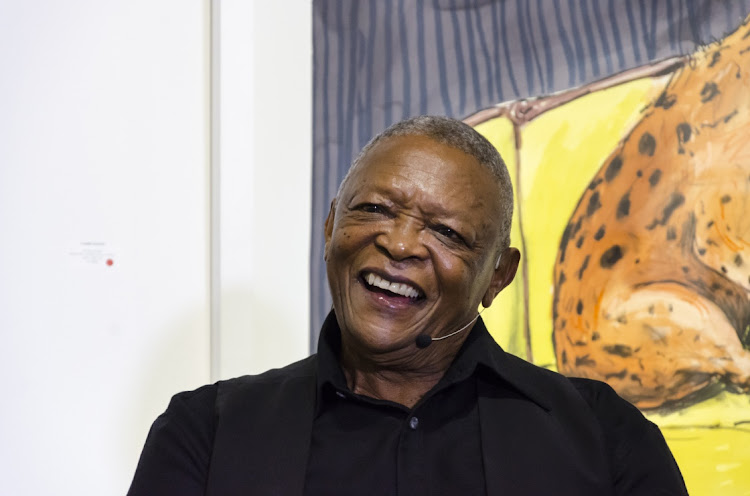 To celebrate the 82nd birthday of the late music legend Hugh Masekela, an exhibition titled Stimela was opened on Sunday at the Market Theatre in Johannesburg.

Masekela died in 2018 at the age of 78 following a struggle with prostate cancer. On April 4, he would have turned 82. Curated by his former professional photographer, Brett Rubin, the posthumous exhibition is a collaboration between the Market Theatre and Hugh Masekela Foundation. To make the day more special, trumpeter Mandla Mlangeni and the Amandla Freedom Ensemble played beautiful jazz tunes to entertain the audience.

Rubin, who worked with Masekela for seven years capturing some incredible moments, presented 12 stunning photographs. He explained that the exhibition was inspired by Masekela’s iconic song, Stimela (The Coal Train). The album Stimela was released in 1994.  The song speaks about the history of the migrant labour system in the South African mining industry and how the country’s wealth and infrastructure was built on the back of labour from all over Africa.  As part of the exhibition are 20 colourful hard hats, a shovel and sand.

The funeral of the legendary musician Hugh Masekela will be a private affair, the family announced today.
Entertainment
4 years ago

During our darkest days as a country, Bra Hugh Masekela, through his music, spread a message of hope for a better tomorrow.
Opinion
4 years ago

Rubin explained that he chose Stimela because it had a deep and profound meaning. “The exhibition had to take place at the Market Theatre because it was a special place for Bra Hugh. His journey with the institution started long before he left the country to New York. As much as I love the song, I was surprised that there was no official video for it. I spoke to him about the idea of an animated coal train as a video instead of having a video of him singing. He loved the idea and unfortunately he passed on.”

“I worked with Bra Hugh for seven years as his official photographer. All these pictures were taken around 2011 and 2012. I added three pictures that were never published before to this exhibition.”

Rubin admitted that it had been a challenge for him to choose works for the exhibition because Masekela had amazing stage presence. “I have a lot of pictures of Bra Hugh in my archives, but it was a challenge to show his side through the pictures.  It is hard to cover everything. Hugh was a world and African music icon. Due to the theme, we had to choose pictures that spoke to it.  And again the limitation of 12 pictures was also a problem.”

Music legend Sipho “Hotstix” Mabuse, who spoke about Masekela, said the world would not have known  South African music were it not for the work of Masekela, the late Miriam Makeba, Caiphus Semenya and Letta Mbulu.  Mabuse, who was introduced to Masekela by Semenya while the legends  were playing in Botswana at the height of apartheid, praised the late trumpeter for his generosity. He said it was a special moment for him when he played with Masekela and the late Jonas Gwangwa at the famous Kippies jazz club in Newtown, Joburg.

“Meeting Bra Hugh was more than a life, but a privilege for me. It was a  great privilege to be in the presence of such greatness and a humble South African. Bra Hugh did not spend much time in South Africa after spending many years in exile. We still wanted to hear great music coming out of him and enjoy his company, but he decided to take a short left.”