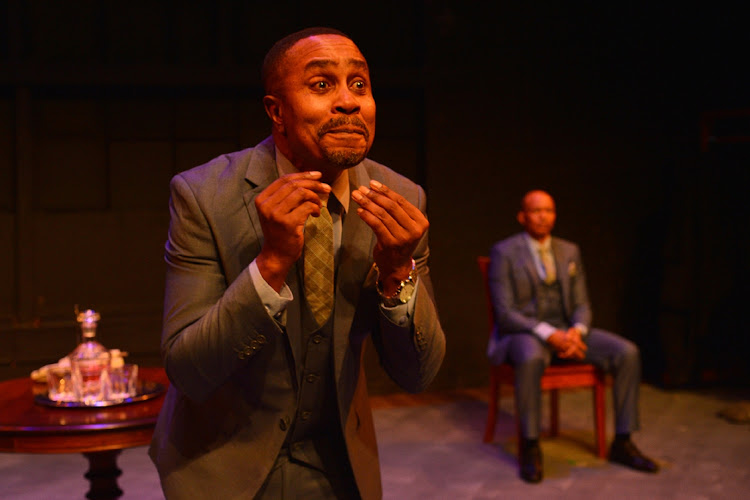 Vusi Kunene and Thulani Nyembe starring in The Mother of All Eating direted by Dom Gumede and Phala Phala
Image: Lungelo Mbulwana

Zakes Mda’s play, The Mother of All Eating, might have been written almost 30 years ago but it remains relevant to this day.

In fact, the play makes more sense now in the context of SA than at the time of its initial production. Set in Lesotho and premiered in that country in 1992, the play puts a spotlight on state corruption as it denounces the culture of self-serving government officials who enrich themselves by abusing state funds.

The play's narrative is that if you want to get rich quick, become a civil servant.

Directed by Makhaola Ndebele, The Mother of All Eating first opened at the Market Theatre in Newtown, Johannesburg, in 2014, featuring Mpho Osei Tutu and Jerry Mantonga.  The play is back, perhaps to remind us about the recent corruption scandals that includes Personal Protective Equipment (PPE) tenders which saw millions of rand of taxpayers looted. And also to the fact that we have the state capture commission underway in the country.

This time around, The Mother of All Eating features legendary TV, film and stage actor Vusi Kunene, who plays Jack Mabaso in Generations: The Legacy, and Thulani Nyembe, who holds a master’s degree in educational drama.

The play opened last week with plenty of confusion, perhaps the result of appointing two great theatre minds – Khayelihle "Dom" Gumede and Phala Ookeditse Phala – to direct one show together.

These two young directors, both products of Wits University, have unquestionable skills as theatre directors, but the idea of having two actors, Kunene and Nyembe, acting the same roles live on stage just did not work.

The two main actors would say the same things at different times and they came across as if they were forgetting their lines or were also confused just like me, sitting in the audience.

Nyembe, who is not a stranger in acting, has a degree in dramatic arts and a master’s degree in educational drama. He is currently working for department of international relations and cooperation.

Moving right along, the addition of Johannesburg-based percussionist, educator and producer Volley Nchabeleng in the whole story was a lucky charm. It worked wonders. It really boasted the story with his beautiful music.

The play drives home the fact that corrupt officials get rewarded instead of being arrested or fired. Once their shenanigans are exposed, they get promoted to different positions elsewhere.

The story is a sad reality of what is happening in SA and how the country has been riddled with corruption scandals for many decades, with implicated personalities enjoying promotion all the time.

The Mother of All Eating is on at the Market Theatre until April 11.