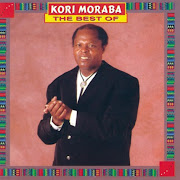 Image: SUPPLIED Kori Moraba who rocked the music industry in yesteryears, has succumbed to covid-19.

Legendary soul and R&B musician Kori Moraba, who died of Covid-19 on Saturday night, was involved in the music industry up to his last.

Moraba, 73, a game changer in the local music scene, produced the classic wedding song Tswang-tswang-tswang, which is still played and sung during wedding celebrations in the country 50 years after it was released.

He died at the Netcare Bougainville Hospital in Hercules in Pretoria west, according to his daughter Joylene Moraba.

Though many South Africans did not know much about Moraba, he was active and performing in different festivals, mainly in neighbouring countries.

His last performance was in Botswana in December 2019, where they had a legends tour with Dr Steve Kekana and Babsy Mlangeni. Apart from producing the famous song, the Soweto-born singer also released other famous songs like Special Night and Maditaba.

“My father had been in hospital for the past two weeks after contracting the coronavirus. And he succumbed due to Covid 19 on Saturday night. We are devastated as the family,” Joylene Moraba said.

She said further details on the funeral will be announced during the week.

Thami Mdluli, one of SA’s sought-after music producers who backed Moraba with his band for many years, said the country has lost one of the greatest artists who changed the music scene with his talent.

Mdluli, who met Moraba in 1982, described Moraba as a loving and highly talented person.

He said the 1980s musicians were in a class of their own.

“You see, in the 1980s we had true talented artists. But now talented artists are scarce and you can only find them in gospel and jazz. Most people are in the industry for money.”

Solly Molepo of the South African Music Industries Council (Samic) said: "Condolences to the family and friends, and as Samic we feel that the giant has fallen. Kori was one of the artists who changed the music industry around and it is a pity that emerging artists do not know much about him because his music was not played on radio. He was very talented.”