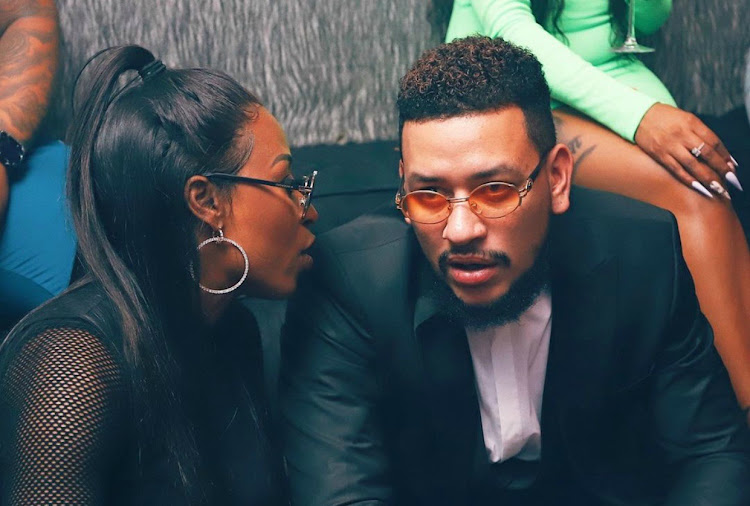 DJ Zinhle and AKA's break-up was the biggest scandal of the year.
Image: Instagram/AKA

The year 2020 has been one most people never want to repeat, including some of our celebs who found themselves the topics of discussion on these social media streets.

In a year filled with a pandemic leading many people to self-isolate, many Mzansi celebs including AKA and DJ Zinhle made headlines for "unexpected" and scandalous spilts.

They were not the couple who found themselves in the midst of a scandal. Zodwa Wabantu caused a stir on social media when she split from her Ben 10 lover Vusi Buthelezi, and Lerato Kganyago and Thami Ndala’s scandalous "divorce" left the media personality hitting back at those who are always prying into her private life.

AKA confirms spilt from DJ Zinhle live on air

After a video of him kissing a “mysterious” woman at a restaurant nearly shut down the internet in February, AKA found himself spilling tea on his split from baby mama DJ Zinhle.

Though initially silent when the “TMZ-style” video surfaced, the rapper later broke his silence. News that the couple's relationship was on the rocks first surfaced earlier this year when City Press and Sunday World reported they had broken up.

After weeks of speculation, AKA spilled the tea on their break-up in an interview on Metro FM in January.

The Baddest hitmaker told DJs Sphectacula and Naves: “It’s been a crazy start to the year. I had to go away. I went on holiday. I was just speaking off air that I went on a very cold holiday. As people might have noticed, it’s my first holiday being a single man for many, many years.”

That TMZ style video someone took of me while out for dinner the other night was probably one of the biggest favors someone ever did me. Thank You whomever that was. 💜

I’ve been single since 2019. What was I supposed to do? Inform you?

When contacted by TshisaLIVE at the time, AKA’s manager Phumza Nohashe, said: “I don't comment on his personal life. Ask me about his professional life and I can comment on that. At this point I won’t be giving comment.”

In March Zinhle revealed she was fine after her public break-up with the rapper, saying she is doing well, but is slightly overworked.

The star told Drum magazine the reason behind her relative silence about the split was due to being booked and busy.

Family and work are important to Zinhle, who said: “I am fine, I’m genuinely fine. I have just been overworked.”

She said as far as her relationship with her baby daddy was concerned, they were civil towards each other and “one big happy family”.

“Kiernan, my mom and I, everyone is just getting along. Our break-up hasn’t broken up the family. It doesn’t have to be a romantic relationship to make a family work and that is what we are trying to do now.”

Socialite Zodwa, who was fresh from a break-up, found herself in the arms of much younger lover Vusi .

The pair reportedly split in June, and the circumstances leading to the fall out are still sketchy.

The socialite threw herself into work, launching new beauty products and endorsing clinical procedures, but told TshisaLIVE she was hopeful Vusi would come back.

“As someone who lives her life in the spotlight, my relationships are very public. When people ask if we have broken up, I tell them that it is over but we are still trying to work things out,” she said.

“I love him and hope we can fix things.”

The pair broke up in May after a break in at their home, which put strain on their relationship.

“We have been going through the most since the break in. We both responded to it differently and it was difficult for us. We decided to take a break but we could get back together once the initial trauma has passed.”

Vusi didn't come back as Zodwa expected, and in August the socialite found herself opening a "fraud case" against him.

Zodwa claimed Vusi was allegedly using her name in a business deal, a claim his legal team has denied.

Approached for comment, Zodwa said she had opened a case of fraud against Vusi and would serve him with a letter of demand.

"The police said I should not comment on the matter. I have a letter of demand for defrauding me," she said.

Vusi's lawyer, Howard Felix, told TshisaLIVE he was not aware of a fraud case opened against his client.

"To our knowledge, as it stands, there is no confirmation of a fraud case being brought against our client."

While people kept meddling in her love life, Lerato took to social media confirming she and Thami had split.

The star shocked many when she issued a public statement on social media last month confirming that she and Thami had split two months after they got married.

The statement confirming the split has since been removed.

A Sunday Sun report claims the split was “bogus” and the couple are still together.

Approached by TshisaLIVE for comment on the report, Lerato asked if she had ever discussed her private life with the media and refused to comment further.

However, taking to social media, she seemed to laugh off the rumours and slammed those who were gossiping about her marriage.

In a statement on Instagram Stories, Lerato claimed “those involved haven't uttered a word”, but the rumours were still being presented as fact.

“I'm going to keep dribbling them,” she added.

LootLove broke the news on her official social media account in May, but did not reveal the reasons why she and baby daddy decided to go separate ways.

In a statement released on her Instagram page, LootLove said: “Sizwe and I have separated. However, we continue to partner gracefully in raising our beautiful kids. I think anyone going through something this complex and painful would understand why I wouldn’t want anyone to have a front row seat to my grieving and healing.”

She said they have separated but will continue to co-parent together.

Speaking to Sunday Sun, Reason confirmed the separation and asked for privacy for the sake of their children and families.

However, the rapper took to Instagram to wish his baby mama a happy Mother's Day, saying their twins were lucky to have her as a mother.

In October, actress Enhle Mbali Mlotshwa was fuming over insensitive hand jokes leveled against her ex Black Coffee after she posted a video featuring a prosthetic hand while on set for an upcoming show, Blood Psalms.

This came after Enhle posed with the prosthetic hand on her Instagram stories and jokingly told fans she was chilling with her "new man" before revealing the hand was a prosthetic made by the show’s makeup department.

While Enhle thought it was a harmless "joke", she was left with having to call her social media followers to order, calling their behaviour “stupid, disgusting and embarrassing” for making fun of her ex-husband, who injured his hand years ago.

In a video she shared on Twitter, Enhle expressed how disappointed she was that people were using her post as a snub towards the father of her children.

"I'm disgusted with what you guys did with the previous post. As much as Black Coffee and I are not together, his still the father of my children. You cannot do what you're doing with this hand situation.  I think it's insensitive and outright stupid. Stop it!

"I'm going to be a mother right now because I feel I need to. You can sometimes be very insensitive with sensitive matters. The post I made was from set. Stop it, stop being stupid. Behave! As a black people, it's embarrassing how you constantly pull each other down. Stop!"