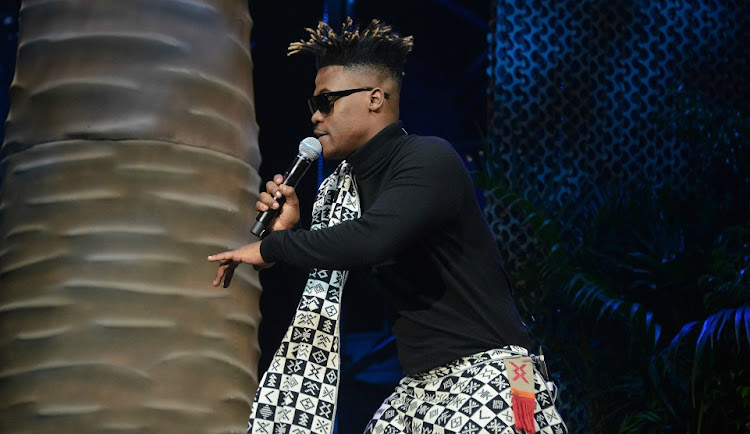 Just days after falling off stage , Mlindo The Vocalist returned to stage on crutches.

Last week Mlindo landed on the Twitter trends list after a video of him struggling to perform while at a gig in Soshanguve, Tshwane, went viral. In the video, shared by a tweep who was at the gig, Mlindo could be seen falling on stage and struggling to get up while his team members attempted to carry him off the stage.

Speaking to SowetanLIVE last week, the musician claimed to have lost balance due to an old knee injury.

He said his knees have been giving him problems since he injured himself during a karate class while at primary school.

“I have a problem with my knees and yesterday [Monday] the venue was packed and the stage was wet,” he said.

A day later, the Emakhaya hitmaker has apologised for the incident, promising his fans that he will do better.

“I would like to sincerely apologise to my supporters and everyone for everything that took place in this past weekend ... I will not get into details but I take full responsibility [for] my actions, and I will not blame it on anyone but myself. I will be better and act better next time,” Mlindo said.

Mlindo denies being drunk on stage

Mlindo the Vocalist has denied being drunk at an event after falling on the stage mid-performance and being carried off.
Entertainment
1 year ago

Over the weekend, the show went on for Mlindo who showed up at a gig on crutches.

Mlindo was booked and busy this past weekend, with gigs all over the country including Middelburg, Soweto and Bloemfontein.

His fans didn't seem to mind the crutches as they swayed to the melodies and harmonies of his well-known songs.

Watch his performance below.

However, the crutches were nowhere to be seen in his other weekend performances.

There was no crutch in sight, just vibes ... See for yourself: