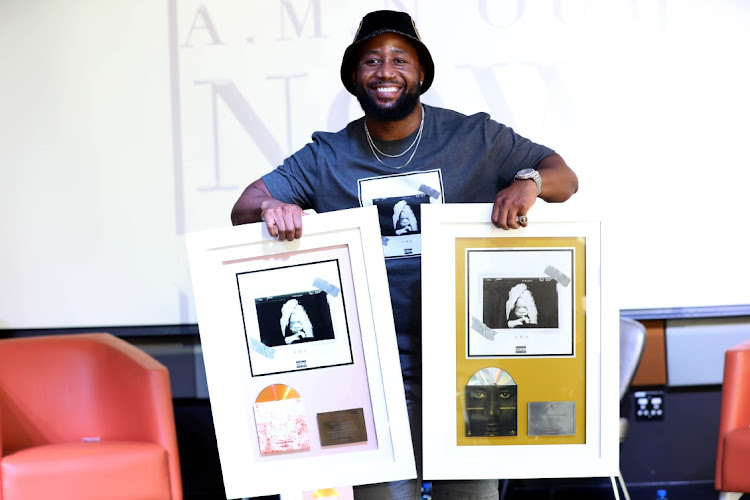 Award-winning rapper and songwriter Cassper Nyovest was presented with a gold disc status for his single Amademoni and a platinum disc status for Good For That by Universal Music.
Image: Veli Nhlapo

Multi-award-winning rapper Cassper Nyovest celebrates the joys of being a dad for the first time in his fourth studio album, Any Minute Now (AMN).

The 21-track album was released three weeks ago, exactly when his boy was born in Durban, and is currently the best-selling album in the country across all genres.

The album's single Amademoni has  reached a gold status  while the other single, Good For That, went platinum. The offering is a potpourri of sounds that range from gospel, traditional jazz, Afro-pop and rap.

Since the album is also inspired by Cassper’s first-time experience as a dad, the rapper says having his son has changed how he sees things and approaches life.

Speaking to  Sowetan  three days after returning  from Durban where he spent almost a month with his son, he says having a son has taught him to be  compassionate and considerate.

“I’m ecstatic and I’m vibrating in a different state that I have never been ... having someone to think about and take care of is special. My son is doing well and looking more like me. When he was born he had his hand as if he was holding a mike into his mouth and I told the nurse that he is rapping.  When you are first-time dad it is such a great experience seeing your own first child. As much as he is special I also want to make his mom feel special too," explains the North West-born rapper.

Born Refiloe Maele Phoolo in 1990, he explains that he always featured legends in all his albums because he believes in working with people that he grew up listening to. He has previously featured artists like Shwi Nomtekhala, Mahotella Queens and Tsepo Tshola.

“I worked with Zola this time because he is my idol and I wanted to acknowledge him while he is still alive. I feel that he broke  barriers for us to be where we are today. I featured him in the song Hlengiwe, which is a gospel song. That song is made specifically for all the gogos out there who loves Cassper,” he said.

“The music I produced is for people who are working, married and have responsibilities and jobs. I would like to thank Ali Keys, my music director, for understanding what I wanted with this album. This album is everything to me."

While he may have looked largely unaffected on the surface, 2020 also had Cassper Nyovest by the throat and now that the storm is “relatively” over, ...
Pic of The Day
1 year ago

Although the country has been under lockdown due to the Covid-19 pandemic, the stress and fear surrounding it has not stopped good things from ...
Entertainment
1 year ago
Next Article