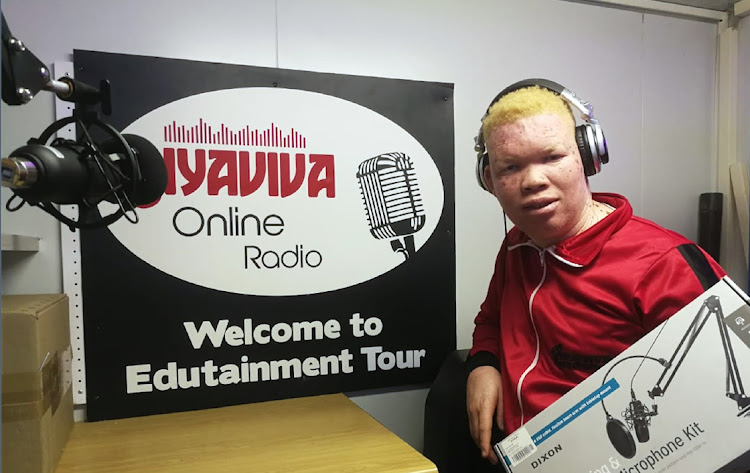 Activist and radio presenter Andile Ngcobo has established an online radio station that will give platform to people living with disabilities.

Ngcobo, who lives with albinism, left Izwi Lomzansi FM after a solid 11 years of service to start his own station Siyaviva Online Radio which went on air yesterday.

Siyaviva means "we are getting ready" in Zulu. The station, which is based in Cornubia, Durban, has already employed 30 people who include radio presenters, technical producers and producers. He said some of the presenters were physically challenged, while others had hearing problems.

Ngcobo said finding presenters for his station was easy since he runs Masiqoqane Albinism Foundation.

Speaking to Sowetan yesterday, Ngcobo said he was excited that his dream had finally come to fruition. He said since he joined Izwi Lomzansi, which is dubbed KZN’s number one community radio station, he always wanted to establish a platform for people living with disabilities because of their seclusion.

“We plan to have programmes where we will be cooking to show people that a blind person can also cook. What we have done as the station is to link the online radio station with Siyaviva TV1 which is a YouTube Channel. When our presenters are on air people will be able to see them on our TV channel.”

The 29-year-old Ngcobo said the station would not be a reality if it was not for people like Dr Nondela Mzimba Dlamini who made a contribution by buying them broadcasting equipment worth R40,000.  Ngcobo believes that the killing of people living with albinism and other disabilities could be addressed if they could be given a platform in the mainstream television and radio broadcasting.

“The station happened because of the people who care and I also used the money that I have been saving from my job as event MC. I started 10 years ago to put money aside for this project. My wish is to see SABC radio stations giving more people living with disabilities or someone who has albinism a platform. A lot of perceptions could change. People will realise that those people are also human beings and start taking them seriously because they are talented. ”

Police Minister Bheki Cele is set to provide details on a plan to combat gender-based violence and femicide in hotspot areas, as proposed by ...
News
1 year ago

A Free State baker is set to become the Vaal Univeristy of Technology's (VUT) first visually-impaired graduate.
News
1 year ago
Next Article