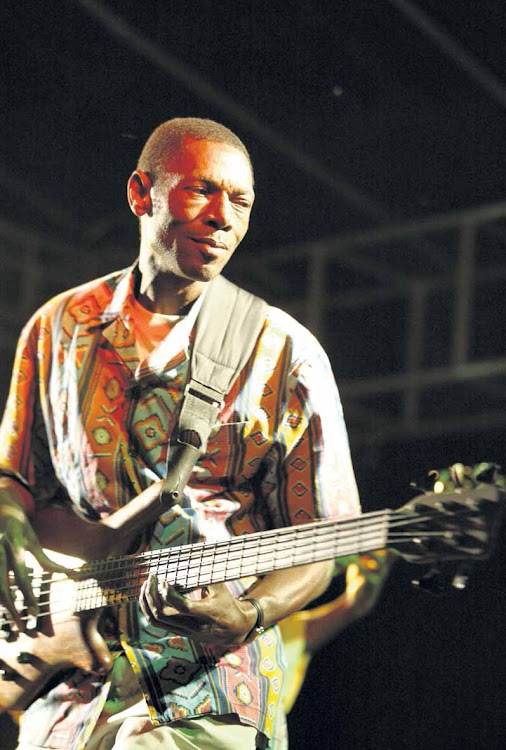 Late jazz legend Sipho Gumede's endless love for his first child Mantombi inspired him to compose one of the biggest songs of his career.

Perhaps the success of the sweet sincere melody was because of the way we were enchanted by this Zulu man's ability to weave tenderness and warmth for his child into the song.

Many jazz lovers have said that Mantombi is the song that lets us see into the genius that is bass guitarist Sipho Gumede, and as a fledgling fan I am inclined to agree.

Today is the anniversary of his death. Sixteen years ago, he died suddenly from lung cancer, leaving behind his wife Fikiswa and his children Mantombi, 43, Sifiso, 29,  Nozipho, 28, Nonthuthuzelo, 19, and Fikile, 17.

Muse Mantombi remembers him as a present father who taught his children to love their African roots.

"He was very strict and set in his ways," says Mantombi. "He was a proud Zulu man and taught me the importance of connecting to my ancestors and putting family first." For most of her teenage years, Mantombi was raised single handedly by her father which strengthened their bond.

"I was initially raised in Swaziland but moved in with my dad in high school when he moved back to Durban. It was just the both of us for a very long time," she said.

Although Gumede was a traditional man, he did not stick to outdated gender roles in his home while raising his daughter. His creativity did not start and stop with music, he not only braided hair but was a masterful cook.

"He was a present dad, very simple and down to earth, totally hands on, when I was young he used to braid my hair and he loved cooking," she said fondly.

Mantombi said she mostly missed spending time with her father and eating his mean fish curry.

"I miss his cooking and the lunch and dinner dates we had on the regular," she said. His second child Sifiso who was only 13 when Gumede passed away has taken after his father's talents.

"Sifiso took after him musically, he has co-founded an indie recording label/production house called Horcrux. He plays the piano, guitar, bass guitar and has received formal training in this regard along with music production and both stage and operatic singing," said Mantombi.

The firebrand's bandmates from groundbreaking jazz group Sakhile remember him as someone who made things happened and as a fierce Pan Africanist.  Founding member Menyatso Mathole said he met Gumede at the famed Pelican night club in Orlando West, Soweto, in the 1970s.

"At that time the Pelican was the only Jazz club you could find there," he said. "That was our meeting point and we became friends for life," he said, making me think that maybe Gumede's 1998 jam Meeting Point was inspired by tête-à-têtes that would happen in these Jazz Clubs.

After making headlines two years ago for becoming a successful public relations officer after years of working as a domestic worker, Ntombizodwa ...
News
1 year ago

He said they used to have jazz sessions at the club until Gumede created a group called Spirit Rejoice which did not work out.

"He decided to start a new band and that was how Sakhile was born," says Mathole. While Gumede, Khaya Mahlangu and Mathole started the group, Mathole was introduced to Don Laka by award winning bassist Bakhiti Khumalo.

Mathole then asked Laka to join and he obliged.  Other members included Mabi Tobejane, Madoda Mathunjwa and Themba Mkhize.

Laka who had met Gumede a few years prior at a Mamelodi Festival where he (Gumede) was set to perform said he became like family.

In 1980 Laka became the keyboard player for the group and went to live with Sakhile bandmates at Gumede's family home in Umlazi, Durban to work on the music.

"This was in the height of apartheid. We went to Umlazi and got to know the family very well, I was treated like one of their children there," reminisced Laka.

A fight that broke out in a taxi because of "taxi maths" inspired a grade 11 pupil to create an app to end miscalculations.
Business
1 year ago

He was with Sakhile for a year and a half before going on to have a successful solo career.

"What actually cemented my friendship with Sipho was working together as solo artists," he laments.

The two of them went on tours together and enjoyed particularly performing in Swaziland.

Some of Gumede's biggest hits include when days are dark friends are few, alone in a strange place, Fikiswa and Gabriels Garden.

A few years before his passing Gumede was the one who pushed Laka to work on his hit song Tshela.

"The reason I will always miss him is that we shared the spirit of resilience," he said. Laka said Gumede decided very early on that he wanted to be responsible for his own success.

"He was a serious Pan Africanist . He despised anything that wasn't African and wanted things to be done the African way."

In remembrance of Sipho Gumede, the family will in September be releasing classic hits Unity and Down Freedom Avenue on vinyl and music streaming platforms.