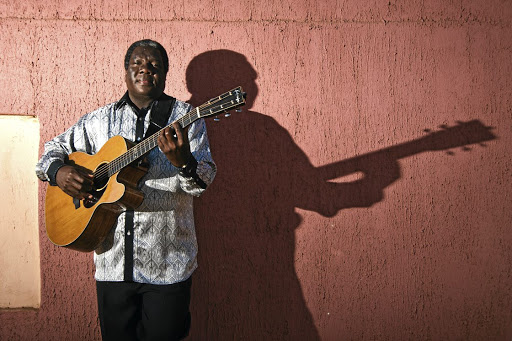 After a long absence from the local entertainment scene, celebrated folk artist, activist and songwriter Vusi Mahlasela returns with a special tribute to his late grandmother Ida through music that taps into the vibrant and rich South African music culture.

The globetrotter who performs regularly overseas, more so in the US, last dropped an album in 2013 titled Sing to The People. His new offering, Shebeen Queen, is a live album in which he pays homage to his grandmother, who raised him and had a big influence on the artist that he is today.

According to Mahlasela, Idah was widely known as Shebeen Queen as she was the first person to own a shebeen in Mamelodi, east of Pretoria.

Through the album, Mahlasela, brings back the good old days by reliving music styles that characterised the vibe at his grandmother's place. These styles include kwela, mbaqanga, isicathamiya, mbube and marabi.

The album is already available on digital platforms and it is expected to hit music shelves on August 14.

Speaking to SowetanLIVE about his new offering, it became evident that Shebeen Queen is a project that is close to Mahlasela's heart.

Joseph Bhekizizwe Shabalala, 78, was a gentle natured international celebrity with humble beginnings in the countryside.
News
1 year ago

He explained that his grandmother was forced by circumstances to make a living out selling traditional beer after her husband was murdered in 1961.

He said it was important to revisit the moment because his grandmother's place, which was known as Sgodiphola, was not your typical shebeen but a platform for all types of music.

"This album is close to my heart because it is not about the venue, which is the shebeen that my grandmother owned. It is more about the circumstances that led my grandmother to start a shebeen and how she managed to make it work during those difficult times.

"I know that she was arrested five times during the raids because it was not permitted to sell alcohol at that time," explained the Pretoria-born legend.

"Magogo was a strong woman and was respected by all in our community. She was always there for me - she fought for me, protected me and stood up for what was right. She was and still is my greatest hero."

The seasoned guitarist who has collaborated with many international stars like Dave Matthews, Béla Fleck, Taj Mahal, Warren Haynes and Angelique Kidjo, recorded the album two years ago at his grandmother's place.

He said they closed the street and organised a mini- concert. Traditional beer was brewed to honour his late grandmother.

On the day, Mahlasela, who was born in 1965, performed live golden oldies from Dark City Sisters and Mahotella Queens, which were very popular in the 1950s to the late 1970s. The songs in the album have been carefully chosen.

The humble legend explained that his grandmother's shebeen became known for its lively musical gatherings at night.

He says the shebeen was a place to be where feared gangsters from Eersterus, politicians and ordinary people mingled.

"It was not about music only but more of a networking place because every character came there.

"Politicians held meetings there, gangsters were hanging out there, fashionistas - both men and women - hung out there. We also had a photographer from Mamelodi who captured those moments but he has since died. Those who could sing, sang a capella at the back."

Mahlasela explains that he felt obliged to revisit that music because it defined the country. Furthermore, he wanted to record some of these great township songs in an effort to preserve the important music that is part of the country's historical heritage.

"This is a typical South African music, which is our signature and our thing. I wanted to honour this music and my grandmother by recording a live show right here in Mamelodi, at Magogo's house.

"We have rich music in South Africa and it is high time we showcase the depth in our music. I celebrate my grandmother, a woman who was respected by all people."