Female singers club together against the virus 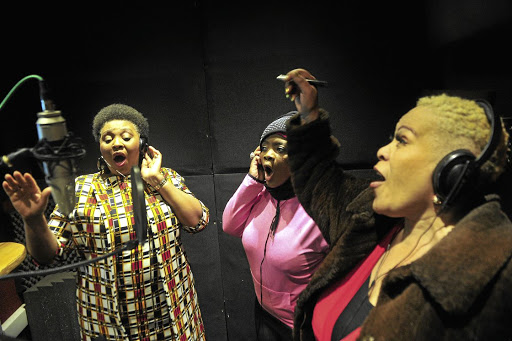 Music stalwarts Yvonne Chaka Chaka, Vicky Vilakazi and Deborah Fraser are in full voice as they record a song with a Covid-19 message./Veli Nhlapo

SA music divas have teamed up to produce a song about the perils of the Covid-19 pandemic and the scourge of violence against women and children in the country.

Titled Sixolele Bawo (God forgive us), the song which was recorded yesterday in Braamfontein, Johannesburg, features some of the country's most talented musicians who call themselves Omama Besizwe (mothers of the nation).

The song is a passionate plea to God to deliver women from the violence and forgive the world for its sins.

Chaka Chaka, who boasts decades of artistic experience, was part of the group putting in their voices yesterday.

She, Vilakazi and Fraser are collaborating for the first time in music, despite their many years as recording artists.

Written and produced by gospel star Fraser, the song will be released in two weeks' time on digital platforms.

Talking about the project, Fraser said: "I decided to bring female musicians together to sing in one voice to appeal to God to hear our cry.

"I know that in the olden days when things were difficult it was women who will go to the mountain to pray. This time we came together as women and asked God to forgive us because we have sinned as human beings.

"We have failed as human beings to honour God and committed many wrong things. And God brought the whole world into a standstill to remind us that.

"I want to thank these women who agreed to be part of this project and took their time to come to the studio to record."

Chaka Chaka said: "There is so much happening in the country, from gender-based violence, children and elderly people being raped and killed.

"I am happy that it took one of us, Deborah Fraser, to see the scourge of our people dying and being abused. We said let us come together as women and appeal to God for help".

Adding her voice, Vilakazi, also a gospel artist, said: "When we come together and sing in one voice God will hear us. There is a lot that is happening in our country, people are being killed, gender-based violence and accidents are rife.

"As much as we are focusing on science to produce the cure, it is important to also balance the whole thing with spirituality," she said.

Tu Nokwe is another well-known veteran in the ensemble of the singers.

South African song bird and humanitarian Yvonne Chaka Chaka has landed a spot in the international body of music composers.
Entertainment
1 year ago

The 60th anniversary celebration of Radio Bantu last week brought back a flood of fond memories of the golden decades of ethnic channels.
Entertainment
1 year ago
Next Article