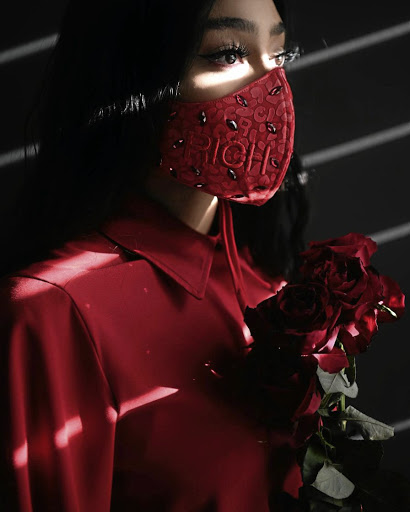 One of Mnisi's expensive masks

The 28-year-old designer has unveiled a five-piece collection of luxury fashion masks called ALKEBULAN, meaning "mother of mankind" - an ancient name of Africa.

The most expensive mask in the range costs R1,999.

Modelled by influencer Sarah Langa, the protective face accessory that has been dubbed the 2K mask is a cherry leopard design studded with Swarovski crystals.

Compared to other designer face masks that have been unveiled in SA, this is the most expensive yet. A signature MaXhosa Africa mask will set you back R600, while Gert-Johan Coetzee's range of masks cost between R180 - R380.

Khosi Nkosi accused of being a copycat

A war over face masks has erupted between established fashion designers Khosi Nkosi and Morapedi Manotoana.
Entertainment
2 years ago

"The Azania face mask range is an extension to the Rich Mnisi ALKEBULAN collection which we launched earlier this year before the Covid-19 pandemic outbreak. The wearing of masks are a preventive measure and a new standard to how we need to live moving forward," Mnisi told Sowetan. "The collection is a premium limited edition of five face mask designs; The Swarovski Crystals Cherry Leopard, The Prayer, Colliding Zebras, Rich Leopard and Just Another face mask."

The cheapest mask in the collection costs R399.

Mnisi said an undisclosed percentage from the proceeds of sales will be donated to charities affected by Covid-19.

While Mnisi declined to comment on whether South Africans can afford the masks amid Covid-19-induced economic uncertainty, social media has received his collection with polarising views.

"If Rich Mnisi says I must buy a mask for R399, guess what I'm going to do? Buy the mask," @moesuttle tweeted.

"So Bonang wasn't lying when she said everything from the Rich Mnisi collection is R2million. Did you guys see the prices of those masks?!," @_LordThamie wrote on Twitter.

"You not the target market mos, Rich Mnisi's is 1 point something," @MbaliK90 shared.

Mnisi was dubbed "Mr 2-million everything" after a video clip of media personality Bonang Matheba went viral with her joking she can't afford his designs.

Last year, Mnisi made headlines when he designed a dress that reportedly cost R94k for Nomalanga Shozi to wear at the BET Awards in Los Angeles. He was named Emerging Designer of the Year by Essence Black Fashion Awards in New York last year.