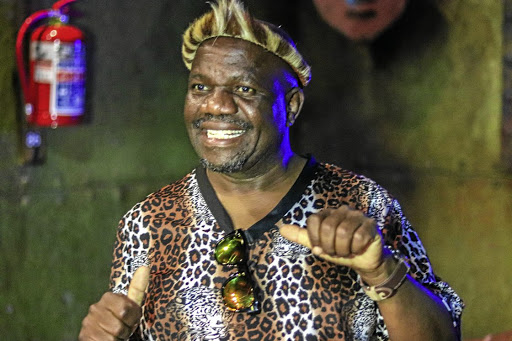 Charles Maja loved to chill out at the local tavern although he did not drink alcobol./Supplied

Late actor Charles Maja was the best father in the world - both his real-life daughter
Molagare and on-screen son Thabo Mkhabela agree.

Renowned for his much-loved character Big Boy on SABC1 soapie Skeem Saam, Maja died on Thursday at the age of 53 after a short illness.

He is survived by his wife Mamopudi as well as three children - Mahlatse, 27, Molagare, 25, and Mapula, 23.

Maja had two grandchildren Sheila and Malesela - named after him.

"He loved wholeheartedly. He was very straightforward and if he didn't like something he will tell you immediately," Molagare said.

"There was never a dull moment at home with him around. We were always laughing at home because he was full of jokes. I have never seen him angry. I will remember his great smile above all."

"Nearly every moment that I've had on the show has been with him. I don't know what now."
News
1 year ago

Molagare said she will miss the pranks that her father used to play on them. One trick that Maja recently played on his family was when he came back home pretending to be drunk. Molagare said it was after that joke that she was convinced her father was a good actor.

"He liked to go chill at our local tavern even though he didn't drink. This one day he came back home and started to act drunk," Molagare recalled

"It was the first time that I had seen him in that state and I was shocked. I was convinced that he was drunk, even though my mother insisted he was acting.

"He went as far as to get a beer bottle and was tripping all over himself. He laughed loudly at our shock."

Molagare said although many South Africans knew her father as an actor he was much more than that. Maja was a tailor too and designed clothing for his family when they went to special events. He also designed sofas.

Maja was also a singer and formed a choir group made of his peers called Kopermyn City Boys - he was inspired by his favourite band Ladysmith Black Mambazo.

This was according to his mentor and retired broadcaster Paul Rapetsoa after Maja, who played the role of Big Boy Mabitsela in the popular SABC drama ...
News
1 year ago

Aside from his acting role in Skeem Saam, Maja also acted in many Thobela FM radio dramas - most noticeably as Bra Tick in Mahlakung.

Molagare said when he landed the role of Big Boy on Skeem Saam it was a dream come true for the family. She was in grade 11 at the time.

"I thought finally my family was going to move out of the village. But my father loved his village life. He had a lot of livestock, grew his own vegetables and he loved the space."

Mkhabela, who played Maja's on-screen son Leshole, said he learnt a lot from him.

"The role he played in bettering my Pedi, craft, emotions and attitude was amazing," Mkhabela said.

"Together, we told stories that reflected our day-to-day poverty stricken families. The advice he gave me in each scene, the interpretation we would share of every scene before we shoot and the comedic sense he added in every scene were legendary."

Maja was rushed to hospital after he fell ill while out to buy essentials. He was admitted for a week before he died. Molagare never had a chance to visit him in hospital because of the national lockdown restrictions.

"I spoke to him a day before he died and he was in good spirits," Molagare said.

Maja will be buried on Saturday in his home village of GaMaja near Lebowakgomo.