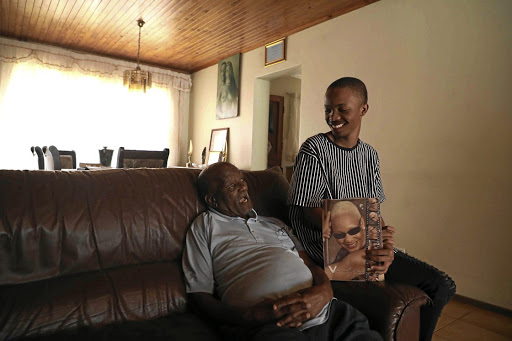 Vinolia Mashego's son Oratile, with his grandfather Collins Mashego, holds up a picture of his mom and the Jam Alley star. / Thulani Mbele

Vinolia "V-Mash" Mashego's father Collins Mashego says his late daughter was like a beacon of hope.

The 79-year-old who was the star of 1980s TV show Lapologa told Sowetan from his home in Mamelodi, east of Pretoria, that he will remember his first-born daughter as an unapologetically loudmouthed superstar.

"She was a livewire, she operated like Eskom, if the electricity goes out life comes to a standstill," Collins said. "That's how I will remember her. She liked to face all her challenges. If she didn't know something she made it her life's work to find out. She would go to great lengths [to find out]."

Collins said of all his three children, Vinolia was the one that took after him. He knew as soon as she joined 1990s youth show Jam Alley that Vinolia would become a superstar.

"When she was younger, I used to tease them that no one will ever be like me. But she took it to heart, she said, 'I want to beat that man'," Collins recalled. "I will remember her as one of my children who once challenged me and succeeded. She surpassed me because she was more popular and loved. People loved me, but she took it to another level.

"They initially gave her a script [on Jam Alley] but she refused and said, 'I want to do what my father used to do'. She blew them away and surpassed expectations. She was a natural and people quickly noticed that. Her career exploded."

Collins said unfortunately for his daughter fame was also a monster and she found herself on a downward spiral. He referred to that period after Vinolia left Jam Alley as "her time on the streets". "She met friends that introduced her to the wrong things in life. She became a victim of that," Collins said.

"But in life if you want to try something you go ahead, not knowing it will ruin your life in the future.

"It was heartbreaking for me because she was my heart and main engine. She was my first born, it was the first time I became a father and she became my pride. So we would pray a lot that she gets her life back on track. But we told ourselves that God was teaching others through her."

Collins said the public gave his daughter a second chance, especially in the last year.

The last time he saw Vinolia was in early February and she was excitedly telling them about her new Moja Love TV show Bheka Sik'bambile.

"She visited us and told us that if we don't see her coming to visit us often it's because she was busy with a show on Moja Love," Collins said. She was telling us that sometimes they would fetch her without making an appointment. She was telling me how they were treating her like a star again and booking hotels for her.

"People loved her so much that they gave her a second chance. But it was short-lived, unfortunately. But she died having made us proud that she had repented."

Vinolia is survived by her 20-year-old son Oratile, who was raised by her parents.

She was found dead in her home in Mamelodi on Monday morning. It is believed that she died of natural causes in her sleep. Collins said his daughter suffered from asthma, but it was not life-threatening. He added that they had come to terms with the manner in which she died - even though it was peculiar.

"Her asthma was very controlled. She didn't even have an inhaler. She would only have trouble sometimes.

"My wife is very Christian and she has advised everyone to accept God's will in the manner she died. We mustn't question God's wishes. We are not going to say 'why me?'"

Vinolia will be buried on Friday at Hatherley Cemetery in Pretoria. There will be no funeral service as the family plans to abide by the lockdown regulations, which prohibit gatherings of more than 50 people.