Lockdown moves The Housekeepers out of scheduled slot 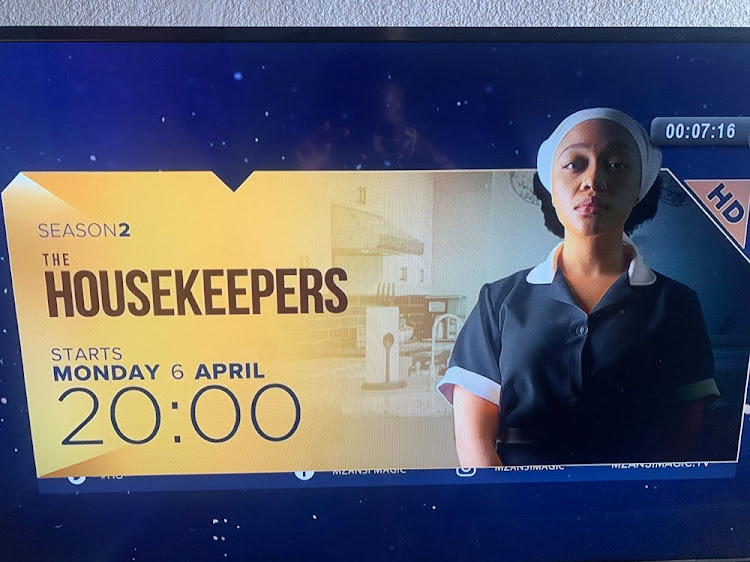 Screengrab of the advert for season two of the show

Mzansi Magic seems to have abandoned plans to air the second season of Thando Thabethe’s hit TV drama series The Housekeepers next week.

Season two of the much-anticipated Mzansi Magic show was scheduled to start airing on Monday April 6 at 8pm.

The promo video clip teasing the new season of the show with a star-studded cast of Connie Chuime, Linda Sokhulu and Masasa Mbangeni has even been airing on the channel throughout the month.

But without warning the channel has abruptly changed its schedule and announced that season five of prison drama Lockdown will air in the time slot instead.

Lockdown back on screen during lockdown

In a contrary situation, drama series Lockdown returns to the small screen during the country’s coronavirus lockdown.
Entertainment
1 year ago

While this is not a pleasant time for all involved, South Africans all over are finding ways to make the best of the situation. We would like you to ...
News
1 year ago

On Tuesday, Mzansi Magic avoided Sowetan’s questions on why the show was taken off its schedule at the 11th hour.

“Our communication with all affected production houses continues. MultiChoice’s announcement last Friday of the R80-million industry relief demonstrates how we view the dire impact of the Covid-19 coronavirus and our strong willingness of supporting the industry,” said Reggy Moalusi, MultiChoice South Africa executive head for corporate affairs.

Sowetan understands that the show commenced shooting in the first week of March, but because of the SA lockdown was forced to halt production before filming the entire season as planned.

An insider further explained that the move prompted Mzansi Magic to push back the airdate of the show to later this year.

Lockdown season five is not new content for the channel as it first premiered on streaming service Showmax in January.

“You don’t see life in prison every day. It’s a lockdown, and the irony is that Mzansi is in a lockdown,” said Lockdown creator Mandla N.

“ The status quo changes, the feelings are unsure and people are confined to a certain space which is like their prison. So every Monday when viewers watch Lockdown it will be like they are in prison. This situation is unlike any other.”