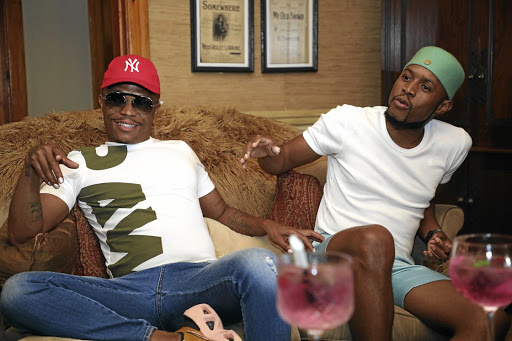 Somizi Mhlongo and Mohale Motaung during an interview with Sowetan at Morrells Boutique Hotel in Johannesburg yesterday. /ANTONIO MUCHAVE

Somizi Mhlongo knew the minute he met Mohale Motaung that he will one day be his husband - and he told him as much. But Motaung laughed it off.

Somhale has spilled this and more details to Sowetan in their first interview since their private white wedding in January.

The couple first met at Mhlongo's book (Dominoes: Unbreakable Spirit - The Somizi Mhlongo Story) signing in 2017 and two months later, they had their first date that ended at Mhlongo's place.

"I knew from the minute I saw him. He thought I was joking when I told him because he was at my book signing," Mhlongo says.

"With everyone I was signing SM, but when he came I signed 'thank you for your support, dear future husband'.

"He laughed it off and two months later, we met for dinner. We met at 8pm and the date ended at 3am. We went through eight bottles of champagne and we have never been apart since then. He slept at my house. I knew then that this is the man I'm going to marry," Mhlongo says.

On Monday, their white wedding that has been kept secret will finally air on Showmax special Somizi & Mohale: The Union. The four-part special has already broken a record for the streaming service.

The first episode had the most views on its first day in the history of Showmax, bigger than any Hollywood blockbuster show.

Somhale promises that what we have seen on social media is only a tip of the iceberg.

They tease that their wedding outfits will be in true Somhale style, be extravagant when we finally see them in the fourth and last episode.

Always the life of the party, SomG flexed his dance moves while in the studio at Metro FM.
Pic of The Day
2 years ago

'We expected Somhale to do well, but the response was even bigger than we’d hoped'
Entertainment
2 years ago

They add that what happens at the altar is a tear-jerker.

Unlike the traditional wedding where they matched their outfits, for the white wedding they kept each other in the dark about their looks.

"The outfit was big when I saw it. It was the biggest outfit I have ever seen in my life. I did anticipate a bit of drama, but not that much drama," Motaung recalls.

"What happen at the altar is the foundation of our marriage, whatever happens, we will always think of that moment," Mhlongo says.

"It reminds us that it was real. I remember the day before it was all fun and games when we were rehearsing. But when it happened, it was so emotional. I reckon they will be no dry tear in every corner of the world."

The couple had planned a third destination wedding that was supposed to take part in Venice, Italy, in July on Motaung's birthday.

But after the coronavirus outbreak, they have since cancelled those plans.

Their honeymoon was scheduled to kick start in Dubai before heading to the Coachella Music and Art Festival next month.

But after the festival was postponed this week to October because of coronavirus threats, Somhale had to also reschedule those plans as well.

They say the biggest challenge for their relationship so far has been constantly being in the public eye.

"A lot of my fans think that they have summed up our relationship and we have to defend ourselves all the time," Mhlongo says.

"We constantly have to remind ourselves why we are in this and not live by other people's standards."