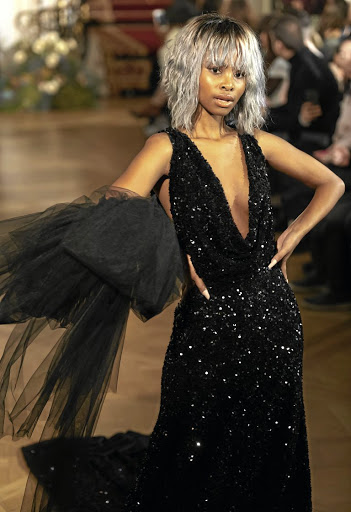 Nandi Mbatha at the Paris Fashion Week in France./ SUPPLIED

Local fashion designer Quiteria Kekana rocked the audience and received a standing ovation in the French capital after showcasing his collection during the Paris Fashion Week.

Kekana's solo show, which was also streamed live on social networks, was presented on the runway at the Ritz Paris at Place Vendôme on Saturday.

The Limpopo-born designer who shot to stardom when he designed an outfit for Beyoncépresented a collection that left the audience feeling both moved and invigorated.

His models, who included TV actress Nandi Mbatha and Tessa Twala closed the show in style.

Speaking to Sowetan while in Paris, Kekana said the response was overwhelming and people loved his collection.

"We got a standing ovation, the collection was great. What is important for me is that I like what I do, and I like making dresses."

He added: "I had to be natural and organic, which is what I always strive for. I know people have tried to drag my name in the mud but what has taken me this far is believing in myself."

The founder of Quiteria Atelier said his collection was influenced by his experiences and struggles in the past two years.

Nandi Mbatha glams up for the races

Isithembiso actress Nandi Mbatha is one of the celebrities expected to light up the star-studded L'Ormarins Queen's Plate Racing Festival tomorrow at ...
Entertainment
2 years ago

At the Durban Fashion Fair tonight, designer Quiteria Kekana will launch his first solo fashion collection since the end of label Quiteria & George.
Entertainment
2 years ago

"My collection is influenced by a lot of pain that I have been through in the past two years, losing everything and starting afresh.

"A person can fall many times because no one has control of life... but we can do our best to heal and rebuild."

Kekana explained that showcasing in Paris has given him an insight into how culture shapes your career and opened up a different world.

Mbatha, who is currently acting in Isithembiso on Mzansi Magic, said about her experience: "It was an out-of-body experience. I was there but I wasn't there. Instead, I'm looking from the outside in.

"The first time it happened was when I auditioned for Simi's character in the TV show Isithembiso."

Mbatha said being featured in the international show meant so much to her.

"I have the drive and determination to sort of just jump into things I've been wanting to do but been holding off for reasons I don't know, really. I'm so inspired, just being in this surrounding was a blessing on its own."