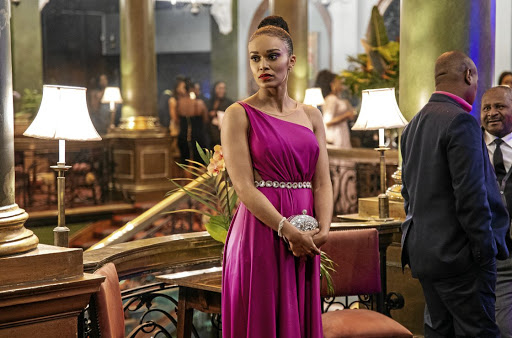 Everyone at an exquisite Johannesburg hotel is making a huge fuss over Pearl Thusi.

Who can blame them? Mama Panther, as she is fondly known to her fans, is about to make Netflix history with Queen Sono.

She leads the streaming service's first African original series and it debuts today in 190 countries.

The four-star hotel's luxury suites have been booked to conduct interviews. There are bodyguards escorting the supporting cast that includes Vuyo Dabula, Khathu Ramabulana, Enhle Mbali Mlotshwa and Chiedza Mhende.

After a 30-minute delay in our interview, I'm finally greeted by Thusi.

She is Queen Sono, sporting a septum ring, sheer blouse and palazzo pants.

Thusi collapses onto the sofa in one of the presidential suites and next to her is her arch-nemesis in the show, Kate Liquorish.

Once Thusi relaxes she admits that she's nervous about the world seeing the anticipated series.

"I'm scared but I'm very excited and grateful. I hope people are inspired and enjoy it. I'm scared that people might not like it," she confesses.

"When you put your heart out and give it to people they can crush you. It's scary to be vulnerable at any given time.

"Everything has led to this moment, to prepare me for this moment. The cooler and calmer I keep my head, the better. A year from now people will have moved on. It is a lot of pressure when you are doing the work but now I've done the work and there is nothing more I can do. The hardest part of the job is done."

Liquorish is more chilled and she tells me she's only a player in Thusi's world.

"Pearl is playing the lead and it's a big flag to carry - it's the first. It's nerve-racking and there is less pressure on other people. When you put yourself out there it's a risk," Liquorish says.

"You just want everyone to love it, so there is a lot of excitement."

The brainchild of creator Kagiso Lediga, from the get-go Queen Sono champions female empowerment with all the big characters played by women.

"Women must just know that they have the power to drive the story. Men are mostly tools [in the show] for females to drive the plot of the story. That is a reflection and representation of what could happen in life," Thusi shares.

Liquorish adds: "It's representative of what is happening and needs to happen more. These characters are awesome, powerful and three-dimensional."

Thusi does a lot in the show. Not only does she do her own stunts, but she also goes nude in the last episode, baring all in a scorching love scene with Dabula.

She thanks Lediga, who helmed the episode, for making her comfortable as possible by "over-directing" the scene.

"Vuyo and I were kind of nervous. I'm always weird before those kinds of scenes. We just had to trust in the moment and believe in the characters and their story," Thusi recounts.

"So Kagiso over-directs such scenes and it's important so that they get the shots they need and we also never get to a point where we are like 'when is this over?'"

Thusi's most challenging scene to shoot was, surprisingly, a subtle scene with Ramabulana in episode four.

She still recalls the enlightening conversation with episode director Tebogo Malope. "I remember I arrived that day and I was exhausted. I just felt like I was empty and I needed a few days off. I pulled him aside and told him I wanted to apologise because I thought I was going to let him down," Thusi says.

"To my surprise he said 'that's great'. He continued to let me know that it means I'm self-aware."