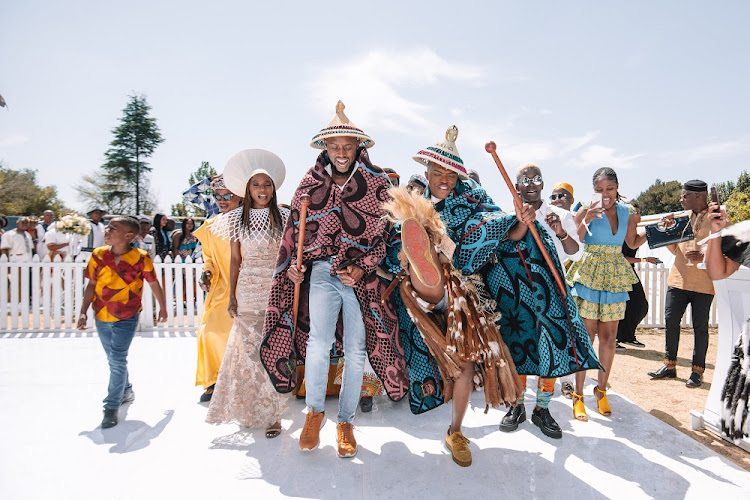 The 44-minute glossy first part of the Showmax docu-series dedicates most of its time to the build-up of the traditional  wedding ceremony – instead of the spectacular extravaganza we witnessed on social media last September.

The episode addresses family conflict, the couple breaking wedding tradition, pre-wedding jitters and traditional rituals – all with a modern and queer twist.

Below are seven things we learnt about Somhale from the first episode of the four-part special.

In preparation of the traditional wedding, Mhlongo’s three famous friends Vusi Nova, Andile Ncube and TT Mbha are concerned that while their pal went over the top with the ceremony, nothing about it reads “traditional wedding”.

“Is it a traditional wedding?” Nova asks to which Mhlongo jokingly comes back: “It’s a homosexual traditional wedding." But then Ncumbe is seemingly not satisfied with his answer and follows up with, “I don’t see tradition” and Mhlongo confidently replies: “Flamboyance is our tradition.”

There is no makoti

The night before the traditional wedding, Mhlongo is accompanied by his family and friends for a gifting ceremony at Motaung’s home in Kibler Park. In the heat of the moment, the group outside Motaung’s gate innocently tries to sing the wedding anthem “Makoti ke di nako [Bring out the bride]”. But Motaung quickly pours water over the awkward situation. “No, there is no makoti [bride].”

Somhale's shindig out of this world

Somizi Mhlongo and Mohale Motaung's nuptial ceremony has broken the golden rule for wedding guests to avoid wearing white at all costs.
Entertainment
2 years ago

For most of the traditional rituals, Mhlongo is represented by his older brother Mazwe Mhlongo, who recites clan praises. “The guy that is speaking is my brother, blood brother that is my father’s son. It’s the second born from my father. There is another one whom you don’t know,” Mhlongo introduces him. “He’s actually the lead singer of Soweto Gospel Choir. He’s a performer and we were together in Sarafina!”

There is no virgin

Mhlongo is not a patient man and his annoyance is clearly visible when there is a delay with Motaung’s family during the gifting ceremony. In true Somgaga style the whole interaction is spicy and funny. “They are taking forever and my patience is running out. For me this is the part of tradition I don’t get, the fuss. What is the fuss about?” Mhlongo questions. “Can you just open the gate, let us in and get it over with? I’d understand if someone was a virgin and they are delaying us because they are doing the deed. We’ve done it 65 times. What could be the delay?”

In the most emotional scene from the episode, the couple opens up about how hard it was to get their families to accept their love. Motaung notes that it’s a particularly  special moment for his uncle, who is also a pastor, to bless their union. “I love the advice he gave, for me seeing a pastor run a ceremony for homosexual people. It took a lot for our families to get to where we are today, especially mine, because everybody in the family was reluctant from the beginning,” Motaung shares. “It took blood, sweat and tears literally.”

Some of the best & worst dressed celebs at Somizi's white wedding

Divorce is not on the cards

Mhlongo makes it clear that after all the trouble and hurdles they overcame, divorce will never be an option for them. ““How do you divorce your partner when you’ve gone through such? Last night’s proceedings discourage me from repeating this… I will never repeat this,” Mhlongo says. “We baffled our mothers. Our families were even more confused by our union, then we divorce? That would be disrespectful. I doubt Mohale’s uncle ever imaged he’d marry off two men. Whoever tries to steal my partner from me, you’ll leave this earth, and I wish you all the best.”

The morning of the traditional wedding, Mhlongo’s strong African beliefs take centre stage. He burns incense at his luxurious mansion and communicates with his ancestors. “Communicating or calling on my ancestors is one of the most beautiful things that I have discovered in my life. Now, I am calling on my ancestors to lead the way,” Mhlongo says. “I am asking them for their blessings and permission. I am asking my ancestors to also accept Mohale. Ten percent of my guest list is surely evil. Therefore I am making sure that their wickedness doesn’t prosper.”