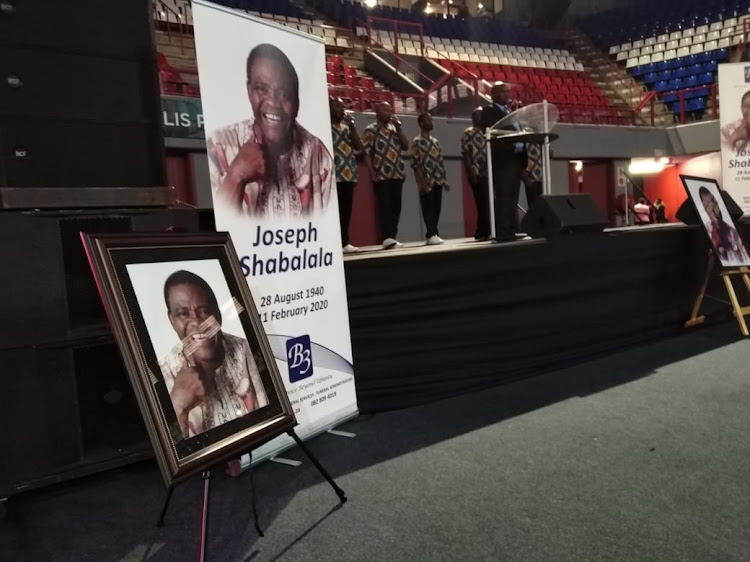 Despite the poor turnout at the memorial service of the late Joseph Shabalala on Thursday in Johannesburg,  scathamiya groups did not disappoint celebrating the legend's life through music at the Ellis Park  Arena.

The groups performances came as a consolation for the event which also started two hours late.  First off the mark was one of Shabalala's own protégé groups, Mtuba Thulisa Brothers, who hailed the legend's life through an uplifting performance.

The group even performed some of the Ladysmith Black Mambazo hits like "Hallo My Baby". The Brothers were followed by Junior Mambazo, a group that was founded by Nkosinathi Shabalala, the late singer's eldest son.

Thulani Mbuli, chairperson of the National Heritage Council of South Africa, described Shabalala as genius, lyricist and a philosopher.

"He served our country both locally and internationally. He won prestigious awards from various institutions because his talent could not be ignored. He represented the country well," Mbuli said.

Among the attendees were the Shabalala's family,  musicians such as Yvonne Chaka Chaka and Khanyo Maphumulo, and ordinary members of the community.

Shabalala, who founded  multi-Grammy award-winning group Ladysmith Black Mambazo, died in a Pretoria hospital last week after a long illness. He will be buried in Ladysmith on Saturday.

KwaZulu-Natal premier Sihle Zikalala says he is committed to preserving the legacy of the late Joseph Shabalala with the continuation of a music ...
Entertainment
1 year ago
Next Article