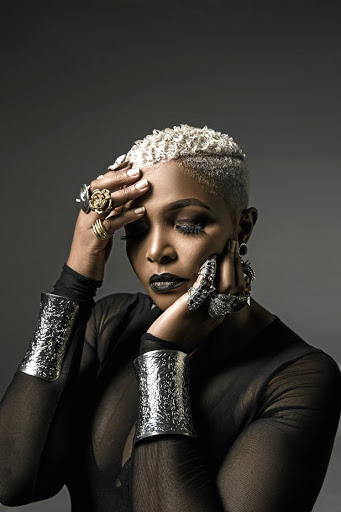 Simphiwe Dana returns to the mic after a long break from music.
Image: Supplied

Simphiwe Dana is finally dropping new music this Friday - for the first time in five years.

The Afro-soul singer gave Sowetan a chance to listen to the first single, called Usikhonzile, from her new album. The song is officially coming out this Friday.

The song will not leave you disappointed and it's a mid-tempo classic-in-the-making that oozes so much of Dana's signature pizzazz.

The masterful Dana showcases her dynamic vocal register that is both soothing, touching and vulnerable. Switching between psychedelic and chantey verses, the song gets you in the groove.

While the wait has been longer than begging for a new Frank Ocean album, the song serves as a great reminder why she wasn't going to release new music unless it was pristine.

"The song has romantic connotations too; it's a bit abstract in meaning. It showcases different layers of my voice and that I can write very well. The structure is amazing; it has underlying church elements to it and has a West African feel to it. The message is very poignant right now, the continent needs leaders that feel and love their people - their empathy is not conditional."

It took Dana two years to record the song and she admitted that she's nervous about how the audience will receive her music comeback.

"I'm not sure if my fans are still out there waiting for me. I'm hoping to get new fans too. I'm nervous that I've been gone for too long," Dana said.

"I don't think my fans will be surprised by me because I'm very versatile and diverse ... That's how amazing it is. I guess those new ones might be surprised about things they didn't know about me, especially with my creativity."

Dana is planning to release her new album Bamako on March 27 - although she warned that the date might change.

She produced and composed the album, recording most of it in her studio. Dana didn't want to rush releasing the record out of "fear of undercooking the album".

All-black everything - and this isn't about rapper Jay-Z's celebratory line from the song Run This Town.
Entertainment
2 years ago
Next Article