Buhle Samuels learns to accept herself 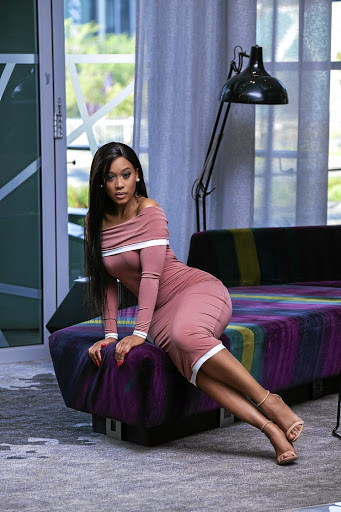 Buhle Samuels has returned to Muvhange and says she is more mature having taken time away to find herself.

Buhle Samuels is embracing her signature big booty now more than ever.

The Muvhango star recently returned to the role of Matshidiso that made her a household name - along with her sought-after derriere.

But the 30-year-old actress says for years she felt body conscious and objectified for her hour-glass figure.

At the peak of her fame, Samuels inspired a trend of fake butt pads named after her onscreen persona Matshidiso.

"I think I'm embracing it now more than ever. I think it has taken me quite some time because I felt objectified for the longest time.

"I felt like people couldn't really see me and I resented that," Samuels says.

"It just felt like I was constantly objectified. It annoyed me. If you look at my Instagram back in the day you will see I avoided taking full length pictures. I was trying to remove that attention.

"But now I'm at that point where I'm like 'this is who I am and if you like my big booty so be it'.

"God gave me this figure for a reason. It's a gift and I need to embrace it," she says.

Born in Protea Glen, Soweto, she knew as early as primary school that her body was different from her peers.

"It has been the theme of my life from as young as I could remember. Even in high school it was a thing, I stopped wearing skirts for that reason. I used to try to wear pants in an effort to make myself demure and fit in," Samuels says.

After three years off Muvhango, Samuels last week returned as Matshidiso to wreak havoc on the show.

"I'm very excited about everything and it's nice to come back to a role that was my break-out role. I'm grounded as a person because coming into the industry I was very unsure about what I wanted," she says.

"This time around I'm more mature and my approach to the craft is different.

"She is a character I play and she's so different from anything I do. Everything she does onscreen I will die on the inside if I attempted any of it in my personal life.

"You know Matshidiso is always up to her tricks. I'm excited for people to get to know her more on an emotional level," she says.

During her time away from the small screen Samuels used the time to find herself. Aside from a recurring role in Imbewu: The Seed, Samuels hasn't done much acting in recent years.

"I just felt like I needed a break. I used the time to recuperate and restrategise. I was just doing me and the things that make me happy."